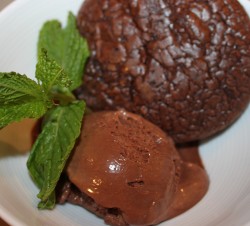 If I say “Paris” what pops into your mind. The Eiffel Tower? Notre Dame? A special restaurant?

For me, it’s a little bridge from one big island to a smaller one. The original Parisians, before the Romans came, were the Parisii and they lived on the islands in the middle of the Seine. Parisii and Romans are gone, the islands have been “modified” extensively with landfills.

But the two big islands are there: the Ile de la Cité and Ile St-Louis. Notre Dame is at the far eastern end of Cité. Just behind the cathedral there is room for some gardens and then a little bridge that slopes down to Ile St-Louis. Just over the bridge and to the right is my favorite outlet of Maison Berthillon, probably the greatest ice cream store in the world. I realize I have just insulted people across the United States. I have visited many of the local — and seasonal — ice creams institutions that are the basis of intense civic pride and sometimes fisticuffs. I’ve seen fights break out over discussions of ice cream in Massachusetts. Berthillon is better.

Yet even in Paris, there is an insidious and possibly relentless change. On our last visit there, Suzen and I noticed some new stores that had lines extending out onto the sidewalk. The lines were filled with people standing on their tiptoes, gesturing, and talking. What could it be? We got in line. We got to the counter. Gelato? In Paris? Heresy?

No. It’s a deserved phenomenon and a delicious one, too. Could this gelato be better than Rome? No worse than a tie.

When Suzen wanted new desserts for this summer, she turned to the “The Ice Cream Bible” also known as The Perfect Scoop by David Lebovitz, an American expert on desserts who of course lives in Paris.

His chocolate gelato is simply the best, the best you will have ever had. It is smooth, rich and filled with chocolate flavor. Use the freshest milk, cream and eggs you can find. The best chocolate and new cocoa. This recipe will simplify your life: it is the only “chocolate ice creamy” thing you will ever want again.

Oh, in the picture above is some mint and a very dense chocolate cookie. The mint you can handle. The cookie recipe is next.

Yield: Serves 1 or more depending on level of selfishness [aka 1 quart]

Warm 1 cup of the cream with the cocoa powder in a medium saucepan, whisking to thoroughly blend the cocoa. Bring to a boil, then reduce the heat and simmer at a very low boil for 30 seconds, whisking constantly. Remove from the heat and add the chopped chocolate, stirring until smooth. Then stir in the remaining 1 cup cream. Pour the mixture into a large bowl, scraping the saucepan as thoroughly as possible, and set a mesh strainer on top the bowl.

Warm the milk, sugar, and salt in the same saucepan. In a separate medium bowl, whisk together the egg yolks. Slowly pour the warm milk into the egg yolks, whisking constantly, then scrape the warmed egg yolks back into the saucepan.

Stirring the mixture constantly over medium heat with a heatproof spatula, scraping the bottom as you stir, until the mixture thickens and coats the spatula. Pour the custard through the strainer and stir it into the chocolate mixture until smooth, then stir in the vanilla. Stir until cool over an ice bath.

Chill the mixture thoroughly in the refrigerator, then freeze it in your ice cream maker according to the manufacturer’s instructions.