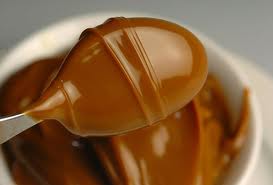 The explosions began in Mexico decades ago. They have spread north. First in the Southwest but now across the country. It has to stop.

No, no, I’m not talking about the drug cartels. I am talking about dulce de leche, that marvelously brown, gooey, rich syrup made from sweetened condensed milk. It is a staple of South American cuisines and in ethnic markets you can buy it by the jar.

But, but, that’s a jar that could have been on the shelf for months, or maybe a couple of years. The stuff could probably survive a nuclear war. The price of the jar should not be measured in dollars but in quality. You need fresh, homemade. There is an elegance and quality to freshly made dulce de leche that is unsurpassed.

Now, the explosions. One common preparation technique has been to put an UNOPENED can of sweetened condensed milk in a saucepan. Cover ENTIRELY with water. You turn on the heat, bring to a boil, then simmer for 3-4 hours. That method works. A lot of the time. But there are cases where the can explodes under pressure. It’s dangerous: metal fragments and hot liquid. Even if you are unscarred, your kitchen will require some rehab.

There will be a couple of recipes posted this week that call for dulce de leche and we want the velvet wonder of homemade. What to do?

Google. And you find the site wikiHow and this article:

The article is very comprehensive, with options about how to do the actual cooking. Want to do it in a saucepan? Here’s the trick. Put two small holes in the top of the can of sweetened condensed milk. Put the can in a saucepan but, of course, do not submerge the can in water. Fill the water up to within 1” of the top of the can. Turn on the heat, bring to a boil, then simmer. You’ll need to refill the water over time.

The cooking time depends on what you want: 3 hours for a soft version, 4 hours for a darker deeper version. Once you are done cooking, empty out the can into a bowl. The top of the can will be more fluid. At the bottom of the can, the contents will be darker and much more viscous. Just get it all into a bowl and whisk. Refrigerate until use.

This particular article is great because it offers other ways to do the cooking:

Suzen and I have not tried these options, but we will get around to it. The major differences among the methods are the cooking times, ranging from about 30 minutes total for a microwave to 8 hours for a slow cooker. Okay, that’s why it’s called a slow cooker.

This stovetop, saucepan technique works so well for us that we are very satisfied. Eventually we’ll experiment. For now, all I want to do is lick the spoon.