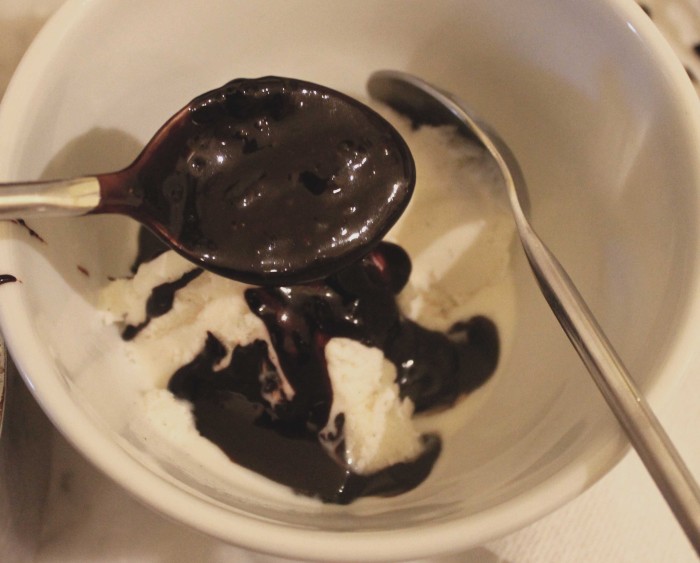 “It tastes funny.” That was my grandson Daniel commenting on last week’s Malted Milk Chocolate Sauce.

Being a grandfather, when the grandson is thirteen and as tall as I am, requires care. Better not to try to bluff it out, I concluded.

“It has malt, Daniel. Do you know what malt is?”

“Yes, it’s something that tastes funny.”

“I think the flavor is delicious, Daniel. Try more.”

It’s pretty hard to convince the kid. He’s stubborn. And, as I mentioned, he’s tall.

So, more discretion. Another recipe. This one, for Fudge Topping, has chocolate and cocoa powder. No malt. There is, by the way, some concern about malt having traces of gluten, so if you need a gluten free topping, this is the one to make.

This sauce is easy to make: five minutes plus some cooling time. That can be tricky with thirteen-year olds. The taste is immediately chocolate with lots of those husky overtones that rich cocoa engenders. There is plenty of cocoa in this recipe so the color is as deep as the flavor.

In the picture above, yes, I have some little imperfectly melted chocolate chips. My mistake and when I reheat this batch they will disappear. The recipe calls for 3 ounces of bittersweet chocolate, coarsely chopped. Thing is, you are adding both that chocolate — chips in my case — and cocoa powder to a liquid that was boiling but is now off the heat. The temperature drops very quickly and, as in my case, melting can be imperfect.

I pointed out the lingering chip fragments to my grandson.

“Tastes fine to me, Gramps,” he said.

In a medium saucepan, combine the sugar, water, and corn syrup and bring to a boil over medium heat. Boil for 1 minute, then removed from the heat and stir in the cocoa powder, chocolate, and vanilla. Cover and let stand until the chocolate has melted. Serve warm.