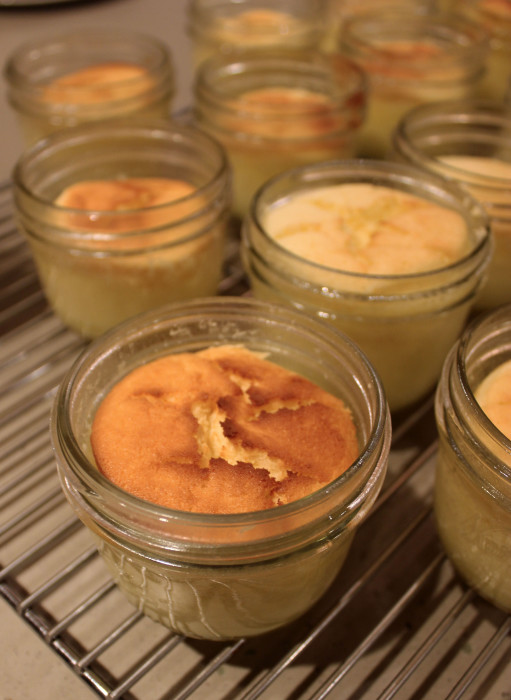 Pudding is something we rarely encounter as adults. We have fond memories of Jell-O boxes and multiple servings of chocolate pudding topped with whipped cream. But pudding now? When Suzen suggests that teams coming for an event at Cooking by the Book finish their hands-on experience with pudding, well pudding cake, there is often some reluctance.

While she cannot twist someone’s arm over the phone, Suzen can be enthusiastic. She’s a believer in this delicate dessert and in the past few months I’ve gotten to eat it once or twice a week as her clients succumb to her enthusiasm. This dessert is perpetually enjoyable. Lemon is a popular flavor, right there after vanilla and chocolate. And the pudding cake has this surprising texture of creamy softness with full mouth feel. It’s not the pudding of Jell-O boxes. And it’s not solid cake. It’s pudding cake and it satisfies everyone who tastes it.

Lemon desserts often pair well with whipped cream and berries. You see in the picture above that we’ve done just that. The berries add a flavor punctuation mark that adds dimension.

Position a rack in the center of the oven and heat the oven to 350°F. Butter eight 6-ounce ceramic oven-proof ramekins or Pyrex custard cups, or even better as picture: mason jars. Arrange them in a baking dish or roasting pan (a 10×15-inch or two 8×8-inch Pyrex dishes work well).

In a large bowl, whisk the melted butter with ⅔ cup of the sugar and the egg yolks until smooth and light, about 1 minute. Add the flour and salt and pour in just enough milk to whisk the flour smoothly into the egg yolk mixture. Then whisk in the remaining milk and the lemon juice until smooth. The mixture will be very fluid.

Put the egg whites in a large bowl. Beat with an electric mixer (a hand-held or a stand mixer fitted with the whisk attachment) on medium speed until the whites begin to foam, 30 to 60 seconds. Increase the speed to high and beat just until the whites hold soft peaks when the beater is pulled away, another 1 to 2 minutes.

Reduce the mixer speed to medium. With the mixer running, very slowly sprinkle in the remaining ⅓ cup sugar; this should take about a minute. Stop the mixer and scrape the bowl. Beat on high speed until the whites hold medium-firm peaks when the beater is pulled away, about another 30 seconds.

Scrape one-third of the egg whites into the egg yolk mixture, sprinkle the lemon zest on top, and whisk until combined. Gently incorporate the remaining whites into the batter, using the whisk in a folding/stirring motion. The batter will still be thin.

Portion the mixture evenly among the ramekins; the cakes don’t rise much, so you can fill the ramekins to within ⅛ inch of the top. Pull out the oven rack and put the baking dish full of ramekins on the rack. Pour warm water into the dish to reach halfway up the sides of the ramekins. Bake until the tops of the cakes are light golden and slightly puffed, and when touched with a finger, they should feel spongy and spring back a bit but hold a shallow indentation, 25 to 30 minutes. Using tongs, carefully transfer the ramekins to a rack. Let cool to room temperature and then refrigerate for at least 2 hours and up to 24 hours before serving, with whipped cream if you like. 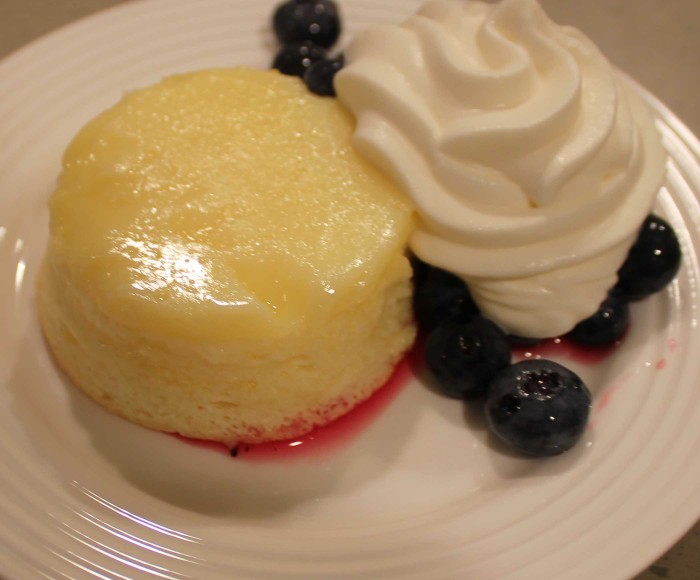