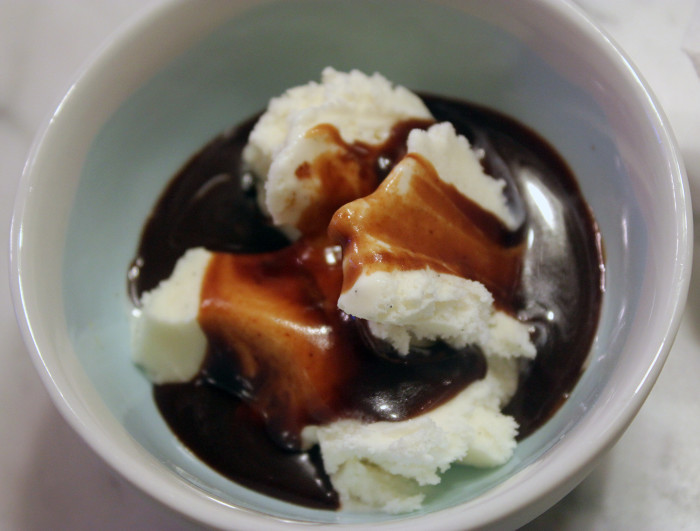 Early in the 1900s, in Switzerland some people made a product from egg [Latin ovum] and malt. They called it Ovomaltine and you mixed it with milk and drank it. When the product was exported in 1909 to Great Britain, someone made a spelling mistake on the trademark registration. Thus was born Ovaltine.

The beverage quickly spread to the United States and was heavily marketed to kids before and just after World War II. The US children's radio series Little Orphan Annie  (1931–1940) and  Captain Midnight (1938–1949), and the subsequent Captain Midnight TV series (1954–1956), were sponsored by Ovaltine. Every kitchen had a container of one of the Ovaltine products [some with cocoa and malt, some only with malt, some only with cocoa]. The popularity spawned great factories for manufacturing the product. Today, some of those factories survive and are still in production, some are legacy buildings beloved for their architecture and converted into apartment buildings, some demolished for super highways.

While it's popularity is past its peak, Ovaltine is still on store shelves and still well enjoyed. Chefs and cookbook authors, in search of old-fashioned malt flavor, are now incorporating Ovaltine into all sorts of recipes. With the 4th of July holiday approaching, with the chance you'll have a cake or ice cream on the table, here's an old fashioned malted milk chocolate sauce that you can put to multiple use.

From the cookbook and Brooklyn milestone Bakery Baked, this is a riff on the classic thick hot fudge sauce you may have grown up on. The folks at Baked have added that very chocolate malt to achieve an old-fashioned toasty flavor and increased richness over "normal fudge sauce." [Is there such a thing?].  The sauce is ideal, of course, for ice cream but you can top pies or pound cakes with it. Yes, pecan pie with chocolate sauce is fervently allowed on holidays. Or, or, add a tablespoon of the sauce to a glass of Coke or Pepsi for a “chocolate coke” that will be memorable. [Not to be done after 10 PM, please; we are not responsible for any induced insomnia].

Lastly, some malted things taste like malt, which would be a bad thing with ice cream. This sauce tastes like chocolate with just some background tones that you would have to be a tasting expert to identify. The sauce has body and flows richly in your mouth.

In a large saucepan, bring the cream, corn syrup, Ovaltine, brown sugar, salt, and 4 ounces of the chocolate to a boil over medium heat. Stir until smooth and the chocolate has melted. Reduce the heat to maintain a simmer and, stirring very slowly, cook for 5 minutes.

Removed from the heat and stir in the butter, vanilla, and the remaining 2 ounces chocolate. Let sauce cool for 5 to 10 minutes before serving.

To store, cool the sauce completely and refrigerate in an airtight container for up to 5 days. Reheat in a microwave or over low heat on the stovetop.