Maple Pumpkin Pie from Kim Laidlaw with An Excel Spreadsheet 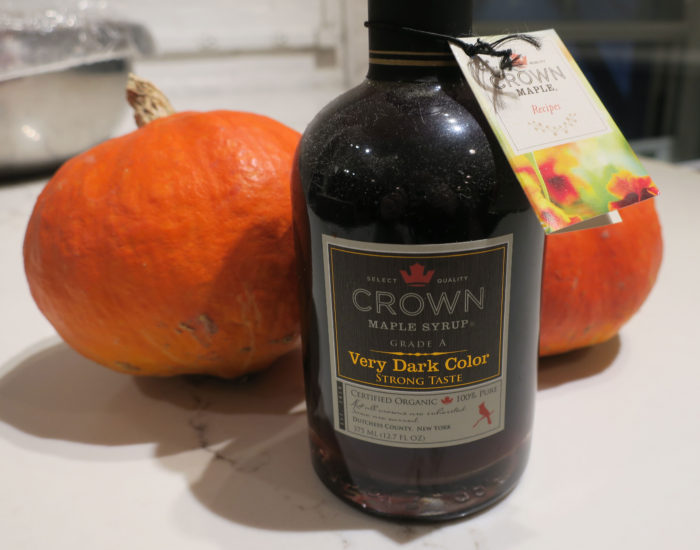 Yesterday I posted a recipe for a Classic Pumpkin Pie. There are options.

“What are you doing?” My wife had come into my office and was looking over my shoulder. There was an Excel spreadsheet on my computer screen.

Ah, you don’t believe me? Here’s a like to the spreadsheet in PDF format.

Now, I’ve had this bug up my *** for several years. I want a Maple Pumpkin Pie. But recipes vary all over the place. And, most importantly, so does the amount of maple syrup. A third of a cup, a half, three quarters. One recipe, from Epicurious in 1996, calls for a full cup of syrup, plus two-thirds cup of milk and, and, a full cup of heavy cream. I am tempted to make it, just to see if it can ever set.

However, in the end, after due consideration, I like this recipe from Kim Laidlaw’s Home Baked Comfort. We’ll be making it for this Thanksgiving. It calls for “just” two-thirds cups of maple syrup, a teaspoon of cinnamon and just little bits of ginger and nutmeg. NO “pumpkin pie spice” which is just a mix of multiple spices. I trust Kim’s choice and balance.

I hope you enjoy this recipe. And the PDF. If one of these other ideas intrigues you, you can Google to find it or contact me. I think your best bet is Kim Laidlaw, a veteran and skilled author and recipe developer.

Yield: one pie, enough for 6 people

Dough for one 9-inch single crust [your favorite, great one in Home Baked Comfort!]

Prepare the flaky pie dough and chill as directed. On a lightly floured work surface, roll out the dough into a circle about 13 inches in diameter and ⅛ inch thick. Line a deep 9-inch pie pan with the dough. Trim the edges so they extend about ½ inch beyond the pan (don’t worry if the dough isn’t completely even). Tuck the dough under itself to create a rim. Use your fingers or a fork to make a decorative rim. Chill in the freezer for about 20 minutes.

Place the pie pan on a baking sheet. Pour the filling into the shell. Bake until the filling is just set and still jiggles very slightly in the center when gently moved, 60-70 minutes. Let cool on a wire rack for at least 1 hour.

Serve wedges of the pie with big spoonfuls of whipped cream.