Quince Tatin with Cinnamon Cream from Sirocco by Sabrina Ghayour 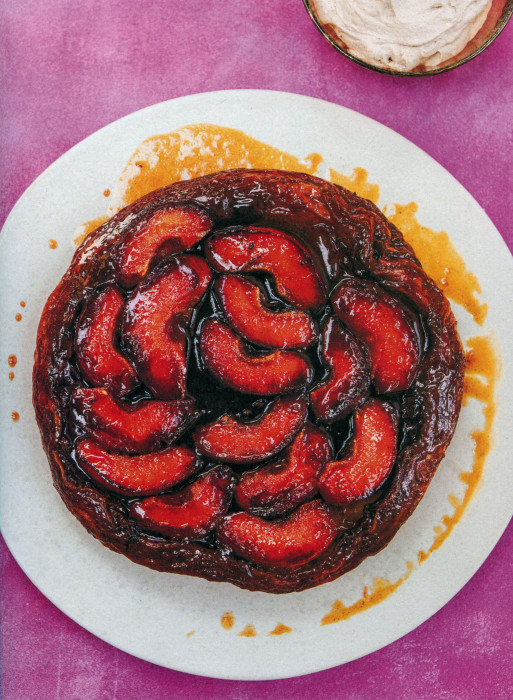 Quinces are related to apples and pears, albeit distantly. It’s an Asian fruit grown mostly in Turkey and China. Very little is grown in the Western Hemisphere and the closest to us is Mexico. Quince trees are modestly high and most often appear in mixed orchards with other fruit trees.

Some quince can be eaten raw, but most species are pretty hard and cooking is mandatory. Europeans make digestive wines from quince but the most frequent their appearance is in desserts.

With the quince season of October upon us, here’s a lovely fall recipe. You may have enjoyed an Apple Tatin. Now go with quince, deep in flavor and color. And here, accented with cinnamon cream.

This recipe is from Sirocco by Sabrina Ghayour who calls quince the “apple of the Middle East.” Since apples started in the Middle East, too, that’s quite an endorsement.

The dramatic photo is from the talented Haarala Hamilton.

For the cinnamon cream:

Put the sugar in a large skillet or ovenproof skillet over medium heat. Swirl the sugar around in the pan (don’t stir) until it has dissolved and turns a deep caramel color. Add the vanilla seeds and swirl to distribute, then add the quince wedges, cramming them into the pan as best you can. Cook for a few minutes on all sides or until they start to caramelize, then add the butter cubes around the quince and continue to cook until the quince has caramelized on all sides. Shake the pan occasionally to prevent sticking. This process should take 8-10 minutes.

If you haven’t used an ovenproof skillet, select an ovenproof dish of any shape (not too large). Carefully tip in the quince wedges (ideally, with the most caramelized sides facing down), then pour any excess caramel on top (the caramelized sugar will be extremely hot, so be very careful).

Roll out the pastry to a circle just bigger than the size of your skillet. Drape the pastry over the quince and tuck the pastry edges inside the skillet (mind your fingers on the hot caramel). Bake on the top shelf of the oven for 25-30 minutes or until the pastry has risen and is golden brown.

When cooked, remove the Tatin from the oven and leave to rest for 2 minutes. Select a serving plate or tray that is large enough to cover your skillet. Using oven mitts or dish towels to protect your hands from the heat, cover the top of the skillet with the plate and carefully flip over onto the serving plate (it will be runny and very hot). Serve with the cinnamon cream.