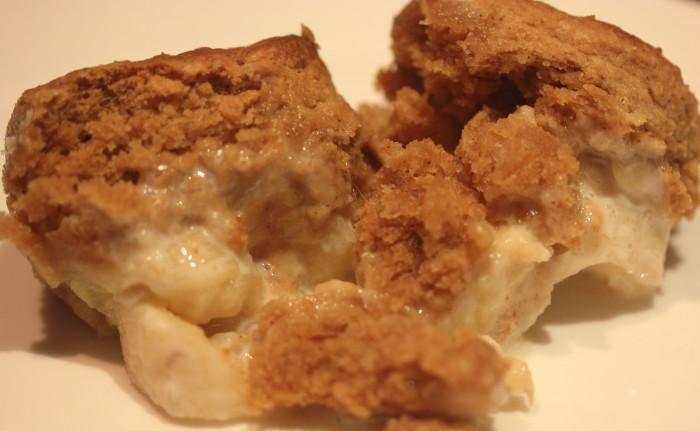 For this Throwback Thursday recipe, I dug two years back to a cold February in 2014 when Suzi and I tried this. You'll like it. Double down with an Irish coffee and suddenly, all the troubles drift away. There is more to molasses than gingersnaps and baked beans!

There was no way I was not going to make this. First, the header notes says it is a “decadent dessert for cold winter days.” Second, it has the word “molasses” in the title. “You are a sucker for titles,” Suzen says to me. “You are just lucky I happen to like a pretty face,” I reply. It’s true. She has a pretty, no a gorgeous, face. And, yeah, I can get sucked in by recipe titles. I was not born in Dixie, but I am up for anything that is molasses. And I love bananas and this says “cobbler” too. Far too much to ignore. It turns out, this dessert is decadent and comforting, all at the same time. It was 10° outside. Suzen actually made this cobbler [my pastry skills were deemed lacking]. We ate it in front of the fireplace while the snow kept coming down. A snowy night and bananas? It’s a combination that once was rare and now can be yours anytime you want. This cobbler can be crafted in just a few moments and enjoyed until the last flakes have fallen. This recipe is from Cinnamon Spice and Warm Apple Pie, a clever little book with many more pleasures awaiting you.

Peel the bananas and slice thickly. Arrange in a baking dish. Mix the cream with the brown sugar and pour this mixture over the bananas. Sift the flour and salt into a bowl and rub in the butter. Stir in the sugar and cinnamon. Combine the molasses and milk, whisking with a fork until the molasses has dissolved. Quickly pour the treacle mixture into the flour mixture and mix to form a soft dough. Tip the dough out onto a floured work surface and knead briefly until smooth. Use the flat of your hand to pat out to a thickness of % inch. Stamp out as many rounds as you can with a cookie cutter, re-rolling the trimmings as necessary. Use these to cover the bananas. Brush with a little milk and bake in the preheated oven for 15-20 minutes, until the scones are well-risen and golden brown on top. Cover with a piece of foil if the scones are cooking too quickly and the banana is still raw. Serve warm with cream or vanilla ice cream.