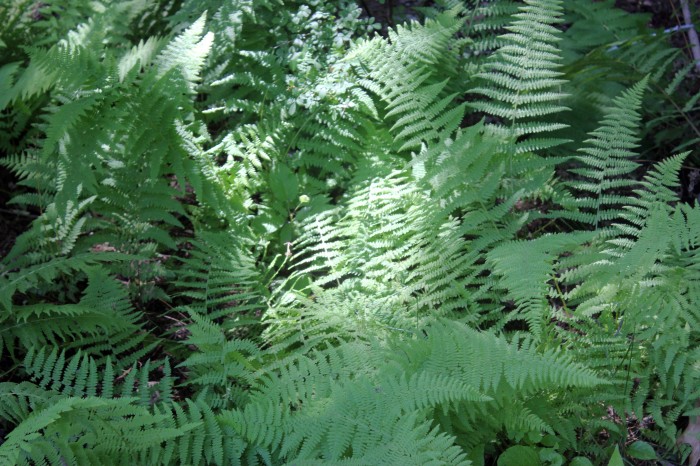 It’s the Fourth of July, a day to be spent quietly assembling food for our friends. It is noon and it’s time for a break. Suzen and I do parties in stages, over days. Trying to feed twenty people all in one day is impossible for us.

My daughter explains that it might be harder for us because we are getting older. I tell my daughter that she might be getting older, but I am not. No, I think the effort we feel stems from the quality of our table. We want everything to be perfect, so we just deal with one dish at a time. As long as it takes.

Twenty people? That’s two days of advance work, some morning final touches, this rest, and then final assembly in the afternoon. It’s hot outside, steamy white clouds bounce over us, and there is a threat of thunderstorms. We’re prepared. We can eat inside or out.

For now, I’m sitting in my porch chair watching those winds, that push the clouds, also animating the bed of ferns before me.

I have a thing about ferns. Most men do. Most of us wanted to be Indiana Jones when we were kids. Or, if we are old enough to remember him: Roy Chapman Andrews. When I was kid, I wanted to be Roy. He wore a ranger hat, carried a revolver and he hunted dinosaur fossils in Mongolia. [Rumor has that, at least indirectly, Andrews was the model for Indiana Jones].

Andrews had a glamorous life and there were plenty of books about his exploits when I was kid. What a lot of people did not know about this man, who became the Director of the American Museum of Natural History in New York City, was the path that took him there. He was born not rich in Beloit, Wisconsin, 1884 and had early jobs as a taxidermist. He put himself through college and moved to New York City to start work at the museum. They had not offered him a job. He just moved to New York and showed one morning, ready for work. That first job was washing the floors, because that’s the only job they would hire him for.

After a few decades, many successes, countless adventures and few brushes with danger — pythons, Mongolian bandits, …— he was the Director.

The wind is kicking up. The ferns are swaying. I have the thing about ferns because I wanted to dig up dinosaur bones and when dinosaurs lived there were lots of ferns. That’s a rumor, too, but one supported by fossils, including many found by Andrews.

There are a dozen varieties of ferns on my few acres. They can grow in the most ungodly places, ones that are stone covered with barely an inch of soil. I know, if I say “fern” you react by thinking of some tropical paradise. But ferns are ubiquitous and can be found high in mountains or in harsh deserts. They thrive in marginal areas where flowering plants would struggle.

As you might pamper a cat or a dog, my ferns in this picture are well tended. They live in a foot of rich soil, I groom them, I fertilize, I water. And each year they come back to blow in the wind, give me peace, while I wonder what it would have been like to track real dinosaurs in fern-filled forests a hundred million years ago. I’m not Indiana Jones or Roy Chapman Andrews. But I can imagine.

Suzen beckons. The party nears. I rise. The ferns are content to remain.