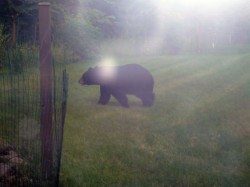 This blog is all about food, but sometimes we need to take a step back. Every animal eats something, often other animals, and that has forged a series of food chains from the bottom to the top. There are, on occasion, discussions about who’s on top of a chain. Living in the Catskills half the time, I sometimes need assistance in chain evaluation and animal naming. The letter below went to my grandsons in Austin after I snapped the picture above.

I do apologize for the poor picture quality. It was dusk, I was inside, the flash went off, and there was reflected light from the closed window. I did think about opening the front door, stepping outside, and getting a better, closer shot. Thing is, if there were an incident and that critter did not kill me, Suzen would have. I have apparently used up all my hospital emergency room credits though 2014. I’ve told her there would be no more visits if I can just have a gun permit. She says that is an oxymoron.

My grandsons are apparently composing a reply, sympathetic to my condition.

How are you? Your Gramps could use a little help. I have a word on the tip of my tongue and I just can’t get it out. Maybe you can help. No, no, I’m fine. I’m still as sharp as a dull tack, but I just can’t name this thing in the picture.

You remember that I used to work with fighter pilots and I learned how they can process all the complicated stuff involved in air-to-air combat. Like, how do they manage to find the bad guys up there with all the clouds and stuff? Well, you learn pattern recognition. You don’t look for everything. You look for the exceptional thing.

Like tonight. I was standing in the kitchen looking out. We have the meadow for a hundred feet and then the trees in the forest beyond. Now, there are literally dozens of trees and hundreds of branches and thousands of leaves. All kinds of colors, dancing in the wind. It never looks the same way twice, yet is does have this kind of constant familiarity.

That’s why tonight, when I looked out, I immediately saw something that was not right. This big black blob. At first, I thought I might the side of an overturned tree. But trees don’t walk.

So I got some pictures and this one is the best. It’s certainly no chipmunk. The black fir is just like on a black squirrel but, again, I think this is bigger. It’s not as tall as deer and it doesn’t move as fast as a deer either. It just walked around like it was at the top of the food chain.

I think it was someone’s pet. Cause, when it was about fifty feet away, I called out “Hello” and it came right over to my window. And it gave me a big smile and he stuck his tongue out. He has lovely white teeth, in perfect shape, which makes me think his owner is very kind and provides very well for him.. I feel awful now that I did not rush out and look for a collar on him with a name tag. That owner must be heartsick. Next time, I’m going right out there.

If you can identfiy this creature for me, I’d be very happy. It’s so jerky to not quite have your mind firing on all five cylinders. Like, I can’t find that stupid honey from this afternoon, either. I was having biscuits with butter and honey and now all I could find was the plate.

When it cools off, I’m going out in the dark to look for that honey. Now, don’t worry about me. I’ve studied how to go outside here at night. You have to stride out with confidence. And use a strong voice just to keep saying, “Here, kitty, kitty.”

Now, where is that flashlight? Ah, to heck with it.