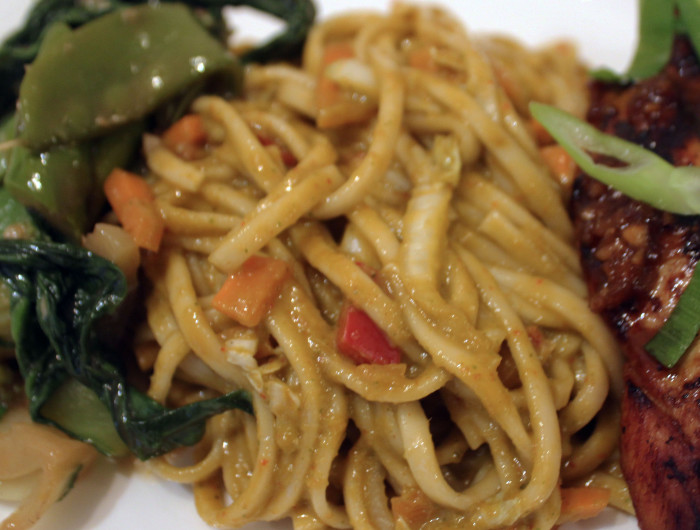 I am not being disparaging when I say this: Asian recipes can have a lot of ingredients. That’s a complement and actually a statement of longing. American food culture is built around fast food. Not just McDonalds and Burger King. Look at the popular cookbooks and the television shows. In 30 minutes, they’ll show you how to do three or four recipes for an entire meal. And often those recipes have just three or four or five ingredients.

Now, that kind of food can be fine, particularly for an American family on a weeknight when both Mom and Dad have just returned from the office. With their laptops and an evening of emails to work on.

But there are other cultures and there have been other times. And those other things are relentlessly capable of superior food. This Asian dish can only remind you of a mother or grandmother working away at home for hours to craft a meal of both substance and integrity. It might mean some time in the garden, weeding before selecting home grown vegetables. And, of course, the noodles would be handmade, not pulled from a cellophane package.

Suzen has served this dish fifty times over the past year. In her hands-on cooking events for teambuilding, the happiest group is the one working on these noodles. There is a delight in going through all these ingredients, smelling, sampling, and ultimately tasting the most lively results.

The original recipe below calls for snow peas and cabbage. Sometimes she does it that way, sometimes the veggies are left out of the noodles and served on the side, as you see in the picture above. For Suzen, and for me, it’s all about the noodles, giving them a dashing flavor from chilies and lime juice fish sauce. Mitigated, of course, with just a little sugar and some coconut milk.

Lots of ingredients. Lots of flavors. A little time. No, I’m not asking you to weed the vegetable garden or even make the noodles by hand. But, do dawdle in the kitchen. Here, just enjoy the time spent creating a dish that is excitingly, even exotically different.

In a large, deep skillet, heat the oil. Add the garlic, shallots, chiles, lemongrass and ginger and cook over moderate heat, stirring occasionally, until the aromatics are softened and golden, about 5 minutes. Add the brown sugar and coriander and cook until the sugar is melted, about 20 seconds. Add the coconut milk and simmer, stirring, for 2 minutes. Transfer to a food processor and blend until pureed. Blend in the lime juice and fish sauce. Scrape the sauce into a glass measuring cup and season with salt and pepper. Leave the skillet on the stove.

Bring a large pot of salted water to a boil. Add the snow peas and blanch until bright green, about 40 seconds. Using a slotted spoon, transfer them to a plate to cool. Add the noodles to the pot and cook, stirring, until al dente. Drain, reserving ¼ cup of the cooking water.

Add 1 cup of the curry sauce to the skillet and bring to a simmer over moderate heat. Add the noodles, snow peas, red pepper, cabbage and carrot and toss well to thoroughly coat the noodles with the sauce. Add some of the reserved cooking water if the noodles seem dry. Season with salt and pepper and serve right away.