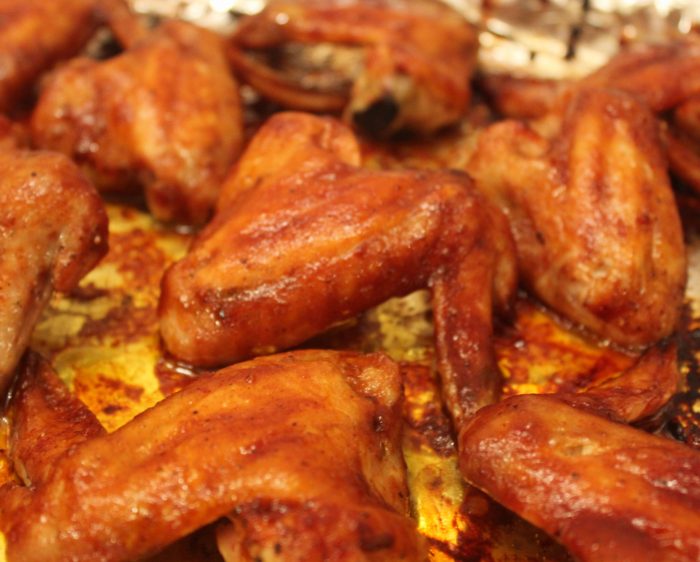 The humbling: damn, these are as good as it gets. Not Buffalo, New York hot. Not quite, but the sweetness and stickiness more than compensate.

For over a decade, Gizzi Erskine has thrilled British audiences with her media appearances and her exciting cookbooks. Gizzi recipes can best be described as special: a few more ingredients, a few more flavors and, miraculously, you do discover the sum is far more than the parts.

The operative word here is “sticky.” Have lots and lots of napkins. You’ll need to trade in your beer bottle or glass after trying to drink and wing it. The sauce does not use the available wing hot sauces. Instead, you start from scratch: ketchup, vinegar, brown sugar, Tabasco, cumin, and paprika. Ah, we did use a habanero ketchup for some additional spark.

This is a great party appetizer or a whole meal as you watch “the” game on tv. We actually devoured these as the Eagles devoured the Patriots. Double satisfying.

Yield: serves 4+, depending on your appetite and other goodies on the table

For the barbecue sauce:

For the blue cheese dressing and celery:

Preheat the oven to 425°F. Lay the chicken pieces on a large baking sheet, drizzle with olive oil and sprinkle with salt and pepper. Pop them into the oven and let them roast for 20 minutes, then reduce the temperature to 350°F and cook for a further 40 minutes.

To make the barbecue sauce, put all the ingredients together in a pan and let it bubble away for 3-5 minutes to thicken up a little. Taste and add more seasoning if necessary.

Thirty minutes before the end of the chicken wings’ cooking time, take them out of the oven and coat them in half the barbecue sauce. Then, when fully cooked, toss them in the rest of the sauce so that they become sticky. They are just as delicious served straight from the oven as they are cold.

While the chicken is in the oven, it’s the perfect time to get on with the blue cheese dressing. Mash together the cheese, soured cream, lemon juice and salt and pepper until combined (a few lumps are nice, though).

Serve the wings with the celery stalks and the blue cheese dressing.