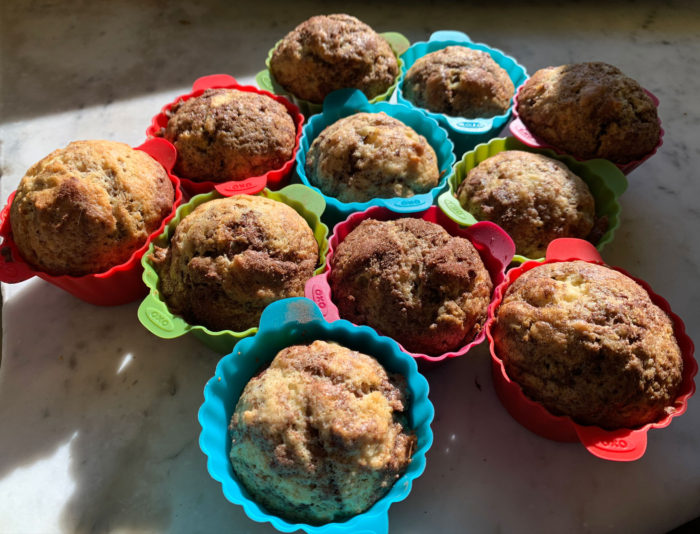 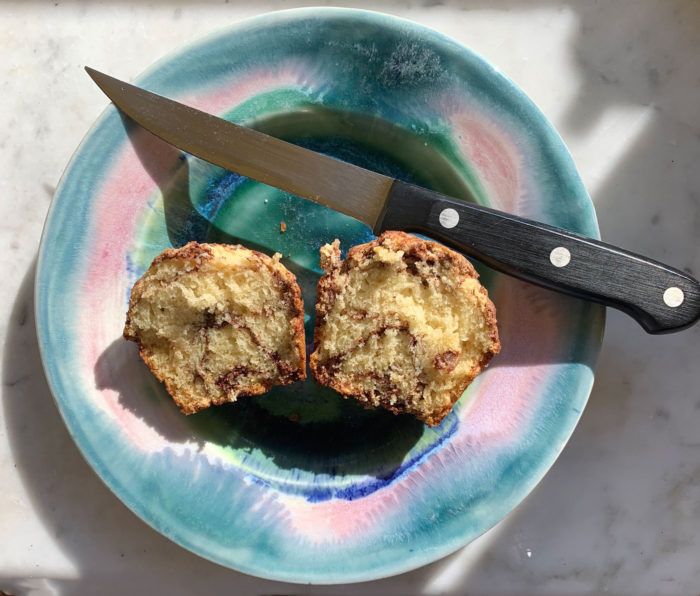 Let’s see: biscuits or muffins? I can never decide one way or another. I did make biscuits last week, so this time it is muffins. But not just any muffin. No, this morning I wanted something with spice, so naturally I was googling “cinnamon muffins.” I found this recipe with a twist. Literally, a twist. The batter is made with no cinnamon. Then a boatload of cinnamon sugar is heaped on the finished batter, and you make two or three folding motions. Not to “mix” in the cinnamon but to give you those cinnamon streaks you see in the bottom photo.

Hot out of the oven. A little butter. Maybe a little more cinnamon sugar on top? Ah, just add expresso. Morning can be so civilized.

Is this really the best cinnamon muffin? Really? It’s damn good and you can have it in your mouth in about 30 minutes, prep and cooking time. You don’t need a mixer, just a single bowl. This is a great recipe for kids.

I did not bother to wait the suggested 5-10 minutes once they were out of the oven. I am a cinnamon addict.

Preheat oven to 400 F. Grease a 12-cup muffin tin. Be sure to grease the entire muffin tin as tops will rise out of the cup. Set aside.

In a large bowl, whisk butter and 3/4 cup sugar until well-combined.

Mix in eggs and vanilla until combined.

Add milk and mix until incorporated.

In a small bowl, stir the remaining ⅓ cup sugar and ground cinnamon together.

Add to the dough, and fold in 2-3 times. You don’t want it to be combined. Check out the picture above the recipe.

Bake 15-25 minutes, or until muffins are golden brown.

Let cool in the pan for 5-10 minutes before removing.