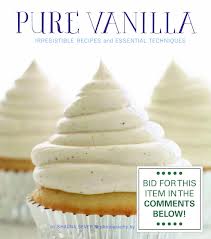 Unfortunately, I don’t think there are any Totonacs left. In 1519, they were conquered by the Aztecs. Now, the Aztecs did take prisoners, but only so they could take their hearts. So, I’m afraid there are no descendants left.

They were clever people. Orchid lovers. Foodies. Somehow, we don’t know how, they learned how to make vanilla from orchids. Thankfully, that discovery was not lost and today we have the wonders of vanilla to sample in so many ways.

About a 100 ways are the topic of Pure Vanilla by Shauna Sever. I posted a recipe yesterday for Vanilla Bean Meringue Kisses [cookies] from the book. It’s the perfect recipe with the right crunch, color and flavor. Below you’ll find an equally compelling recipe for Vanilla Bourbon Maple Syrup.

There’s more than kisses and syrup here. Here are the book chapters and representative recipes:

I’m not sure which is coming first in my weekend kitchen, that Vanilla Mojito or the Vanilla Cream Pie. When you think about it, they are not mutually exclusive. Not at all.

You will find Pure Vanilla prominently in the new books section of most bookstores. The book is beautifully laid out with very inviting photographs by Leigh Beisch. The instructions for each recipe are presented with a very different style. Each step is a separate paragraph, bulleted with a highlighted title. I just find it very easy to follow and to skim over the steps right at the start so I have quick overview of what I have to do. Have you ever put something in oven, turned around, and seen that “thing” what was supposed to part of the other “thing” that is now baking away to become “something” that is apparently now a “science experiment?” Won’t happen with Pure Vanilla.

Pour the bourbon into a small saucepan. Add the 2 vanilla beans, split lengthwise. Bring to a boil over high heat and continue boiling the bourbon is reduced by half.

Sir in the maple syrup and the pinch of salt. Removed the vanilla pods and scape the caviar into the syrup. Or, if you like, leave the pods in the syrup so the vanilla flavor intensified over time.

Let cool. Place in a tight jar. Use often. [Drink recipes to be devised and blogged by Brian]