Brian’s Chipotle Crema for a Hot Day with Grilled Corn 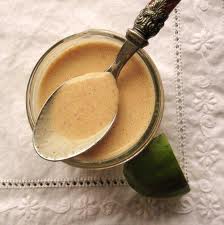 The current heat is good for some things and certainly great for one: corn. The burst of heat now is letting your local corn plants create sugar in those kernels as they expand to the bursting point.

So, it’s the perfect weekend to visit your farmers market and grab as many fresh ears as you can handle. Don’t dawdle with that culinary treasure. Head home, and cook as soon as you can. Grilling is ideal, but boiling the ears is fine.

And, to serve with that corn, better than butter is a chipotle crema. You’ll find many recipes for crema, with a variety of dairy of products considered: half-and-half, heavy cream, and sour cream. This recipe uses my favorites, equal parts heavy cream and sour cream.

However, to quote Robby the Robot in Forbidden Planet [1956]: WARNING, WARNING!

Creama recipes typically call for mixing the dairy products together and letting them sit out at room temperature for 3 to 24 hours [depending on the recipe]. The idea is to let “natural cultures” form and to thus create the correct texture and flavor. In the heat wave now blanketing the United States, following those directions might result in very upset tummies. Or worse. Or worst.

So, in my recipe, you mix everything at once and refrigerate. I’ve included some lime juice for tang and an acid safety factor. No, this is not authentic street-wise crema. But it is quite delicious and very food-safe.

How to grill corn? Oh, there are many suggestions. We loosen the top of the husks, but grill with the husk on, checking an ear or two for doneness. Some folks prefer to husk the corn first, put the corn on the grill, and constantly turn. Others will husk, wrap in aluminum foil, and grill with occasionally turning.

Keeping the corn in the husk seems the easiest. Rotate every 5 minutes. Total cooking time with this method is about 15 minutes on a medium-high grill.

Place all ingredients, perhaps just 3 of the peppers first, in the bowl of a food processor. Process until smooth.

Taste test and adjust. You may want to add the 4th chipotle or simply more of the adobo sauce. You can work your way up the heat ladder, but not down very easily.

Refrigerate until using with your corn.