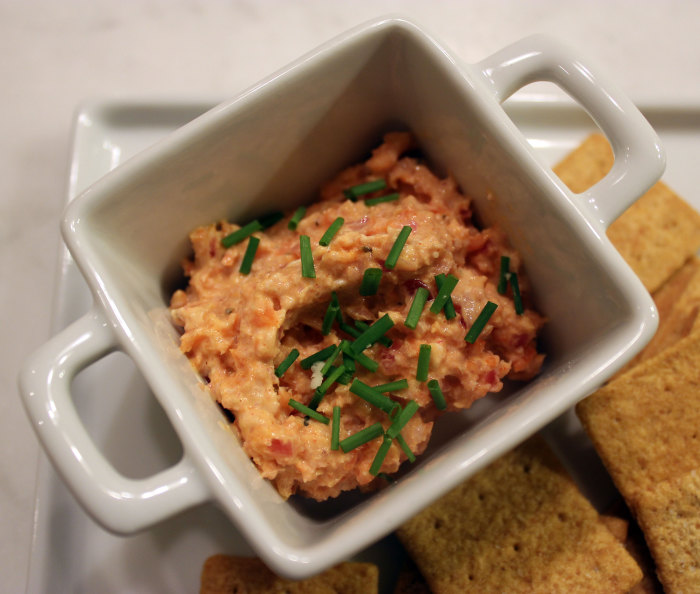 Why do we say, “It tastes like chicken.” We say it all the time.

No, that dip in the picture certainly does not taste like chicken. It doesn’t taste like anything you can recognize. It’s a transformation.

Too often when we cook, it is to coat or frost some adornments on top of a basic flavor that does not change. That’s why we say, “It tastes like chicken.” We can barbeque chicken, bake, roast, braise or broil. We can smother it in a French sauce or adorn with mushrooms or cover in bread crumbs and fry. It doesn’t matter. It’s still chicken and that chicken flavor is always there.

Now, I am not against chicken. Some of my best friends have been chickens, until I ate them.

But, don’t you long for a dish this is just wonderful and unrecognizable? A real transformation?

That’s what this dip is. I was inspired by a Crab, Lime and Scotch Bonnet Sauce recipe from The Red Hot Chile Sauce Book by Dan May. The Caribbean section of the book is all about Scotch Bonnet peppers. Technically, I suppose they are peppers but they really are flavor hand grenades.

Thing is, Dan’s original recipe called for groundnut oil and coconut milk and lime juice, ingredients I did not have on a dark and stormy night. I improvised and along the way learned why the oil and coconut milk were needed. When I was finished cooking, as you’ll see below, my result was tasty but dry and flakey. That’s when I was inspired to finish the dish off with a little mayonnaise — feel free to use sour cream or crème fraiche. Those more sour ingredients might prove interesting.

The taste here is very complicated, but in a phrase: flavor bomb. There’s just a hint of the carrot before the Scotch Bonnet kicks in. And stays. Scotch Bonnet flavor persists so please, please only use one. The crab flavor is not lost, but it is transformed. All you sense is that there is something “sea-foody” in the dish, but you’ll be hard pressed to immediately say “crab.”

You really don’t sense any common, recognizable flavor. There’s just this tide of hot and sweet and earthy flavors.

It’s a perfect dip but what beverage can you pair it with? It’s too overpowering for wine and would fight with a forward cocktail like a margarita. Beer. This dip is meant for beer.

Serve this to guests and no one will say the “chicken” word, but you are certain to be asked for the recipe. Remember: one Scotch Bonnet, one.

Melt the butter in a saucepan, then add the onions and cook over medium heat until softened but not at all caramelized, about 5 minutes. Add the garlic and cook briefly, stirring to prevent burning.

Add the carrot and lemon juice. Cook while constantly stirring until the carrots begin to soften. Add the crabmeat and cook briefly until the crab is warmed. Add the paprika and stir to mix.

Remove from the heat and put the mixture into the bowl of a food processor. Pulse for several seconds until the mixture is fairly uniform in color.

Remove from the food processor and place in a bowl. The mixture should be fairly dry and crumbly. Add enough mayonnaise to achieve a decent “dipping” consistency. For me, it was just slightly less than ½ cup.

Chill for an hour to let the flavor blend. Garnish, if you wish, with chopped chives or other herbs and serve with crackers and beer.