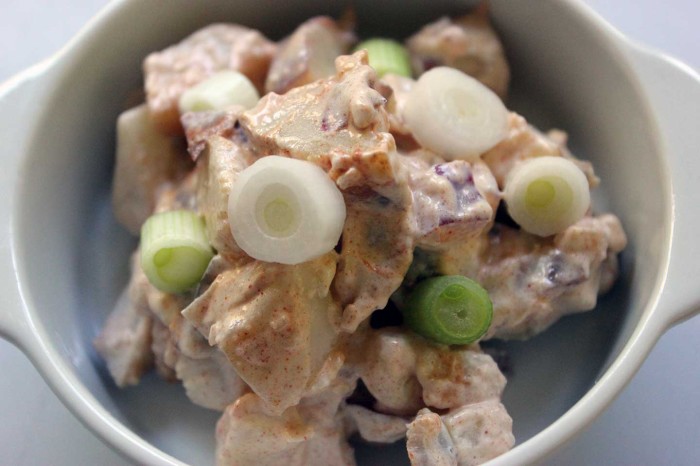 We have just had the summer solstice and now, officially now, is the season for barbecue and all the side dishes that tradition dictates we bring to the table: beans, slaw, cornbread, potato salad, …
Ah, potato salad. Many of us grew up on that mayo-and-hard-boiled-egg-and-celery recipe, but there are options aplenty. For your consideration, here is minimalist version of potato salad with few ingredients but deep flavor and some heat. This time the heat is not from south of the border, no chipotle here, but instead from Hungary. You’ll be fascinated by what a touch, and I do mean a touch, of hot paprika can do.
If in preparing this salad you do happen to go overboard with the paprika, do not fear. A little additional apple cider vinegar and some salt can restore a modicum of balance.
From this basic recipe, you are free to add in what you want: those hard boiled eggs, or herbs, or some peppers. Even that chipotle. But, on your first pass, stick to this recipe to see how enjoyable a very basic potato salad can be.

Boil the new potatoes until soft to a knife, then allow to cool to room temperature.

In the meantime, cook the bacon until crisp. Set aside to cool.

In a separate bowl, add the sour cream, mayo and vinegar. Whisk to mix. Add salt and pepper to taste. Pour this dressing over the bowl of potatoes, bacon, and onion. Stir slowly to mix. Make sure every piece of potato has dressing.

Add the 1 teaspoon of paprika and again stir slowly to mix and make sure everything is coated. Taste test to your satisfaction. A single teaspoon of paprika will give you some flavor and heat. Add more if you desire, but be aware you’ll soon be creating a paprika, and not potato, salad.

Put the metal bowl in the refrigerator to chill. When read to serve, dust each portion with some sliced scallion.