Caponata Classica from Sicily by Phaidon 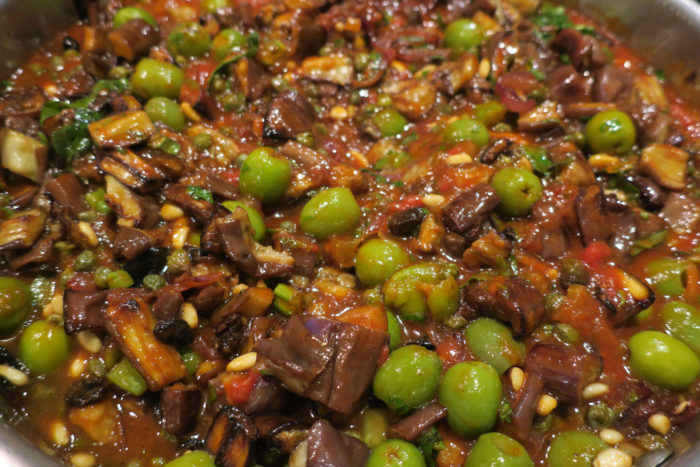 We just enjoyed nine days in Italy, eight in Sicily and one in Milan [we broke up the trip home over two days and walked Milan for 20 hours!].

This was our first trip to Sicily and this dish was ubiquitous. You have water, you have bread, you have caponata. It’s a classic Sicilian dish framed by a marriage of fried eggplant with celery, vinegar and capers in a sweet and sour sauce. Around the island, there are variations to those basic ingredients: olives, carrots, raisins, bell peppers. A Palermo version features lobster and swordfish with asparagus, grated dried tuna roe and shrimp. So, if you visit Sicily, if you order caponata, be prepared for a surprise.

Suzi just served this dish to a guest here at Cooking by the Book, a woman with a Sicilian husband. She took one bite and smiled at Suzi: “Perfecto.” And that made Suzi beam. As soon as we got home, Suzi made a double batch and she’s freezing most of it. When plan on using it for those “emergency” nights when you have only time to cook pasta and put “something” on it. This “something” is marvelous.

While caponata may be considered a simple dish, it is not. To get the distinguished caponata flavor, you must achieve a perfect sweet and sour sauce. You must balance the acidity of the tomatoes and the vinegar with the sweetness of sugar and raisins. That’s why this recipe says to taste for flavoring with salt at the end. And then, at the really very end, adjust the sugar. You should not taste tomato or vinegar or raisins or sugar. You should just taste caponata. And when you have tasted this dish, you’ll be making room in your freezer, too.

Heat 5 tablespoons of the oil in a frying pan or skillet, add the aubergines (eggplants) and cook, stirring frequently, for 10 minutes, until golden brown. Remove with a slotted spoon and drain on paper towels.

Heat the passata (pureed canned tomatoes) in a small pan, then stir in the vinegar and remaining sugar. Heat 2 tablespoons of the remaining oil in a large frying pan or skillet, add the celery and caramelized onion and cook over low heat, stirring occasionally, for 5 minutes. Add the capers, olives, raisins and pine nuts and cook, stirring occasionally, for a few minutes, then stir in the tomato sauce mixture, basil and aubergines. Simmer for 15 minutes, then season to taste with salt and add more sugar if necessary. Remove the pan from the heat and transfer the caponata to a serving dish.

Heat the remaining oil in a small pan, add the breadcrumbs and cook over medium heat, stirring frequently, for a few minutes until golden brown. Remove from the heat and sprinkle them over the caponata. Add the almonds and let cool before serving.