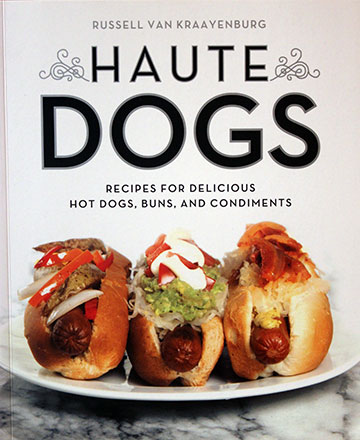 For many of us, a “hot dog” really means “chili hog dog.” In Haute Dog, Russell Van Kraayenburg offers dozens of hot dog recipes, from both the United States and around the world. The US versions are often slathered in chili sauce. I have fond memories of Roakes in Portland, Oregon, and I’m always in search of a way to duplicate that secret recipe.

I have not tested this recipe, yet, or its variations that Russell discusses. But below is Russell’s well considered recipe for Classic Hot Dog Chili. It’s a basic recipe that can be transformed into any of the 8 varieties of chili sauce presented in Haute Dog. I invite you to look at the book for the specific details of these variations:

I compared Russell’s basic recipe with others and they all share the same basic ingredients, but, to his advantage, Russell wisely uses real garlic and onion instead of the onion and garlic powders that frequent many recipes. He’s making this chili from scratch and that can only benefit us. Besides this basic recipe, I’ll be trying the variations above, looking for a particularly great taste and perhaps something close to Roakes.

Your childhood memory may be stirred here, recognizing the flavor sparks that mustard or paprika or vinegar added to those neighborhood dogs you grew up with.

My experiments begin this week, and I will report in. One note, Russell says this recipe produces 1 quart of sauce, enough for 4 hot dogs. That’s one cup of sauce per dog. I interpret that as a forewarning, if not proof beyond a reasonable doubt,  that he is a hot dog extremist.

Yield: 1 quart of sauce [can be frozen]

Add the salt, black pepper, chili powder, cumin cayenne, and beef. Cook until beef is browned and no trace of pink remains.

Reduce the heat to medium-low and add beef stock and tomato paste. Stir until evenly combined. Simmer for 30 minutes, stirring occasionally. Serve immediately or store in an airtight container in the refrigerator for up to 3 days.