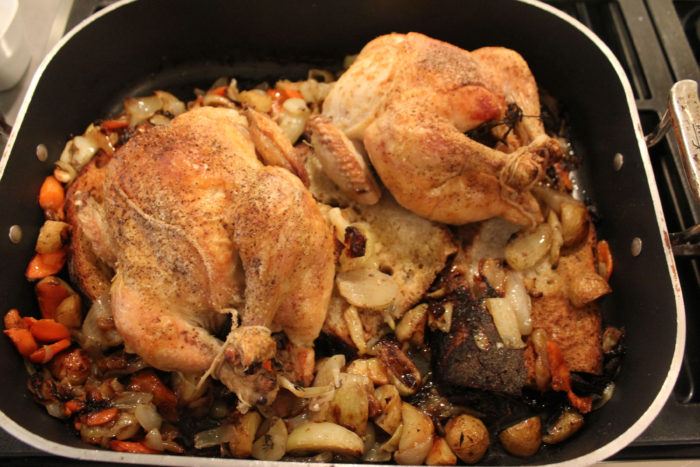 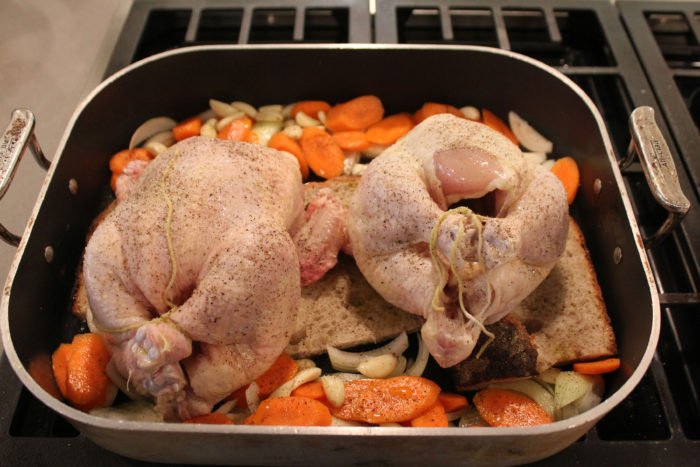 At Suzi’s cooking school here in Tribeca, Cooking by the Book, corporations bring in teams for an evening of teambuilding based on a kitchen experience. That experience be just fun, cooking together while sharing wine, or a real exercise in teambuilding with challenges tossed into the cooking program. The full team is broken into groups with each group cooking one dish of the entire meal. Each group has their own chef assisting them, not actually doing the cooking but providing an insurance policy to make sure there is no failure.

Teams range from 10 to 50 people and Suzi always has 2 to 5 chefs on hand providing assistance. It’s a high ratio of help to guests, a ratio that you probably don’t have for your private parties. And, sometimes neither do we. Last week Suzi had a family party with 18 people coming and she was doing all the cooking.

Suzi loves to mingle at parties. She does NOT want to spend all her time in the kitchen. So, she served up this marvelous chicken dish from Dorie Greenspan. Dorie calls it roast chicken for lazy people [for Les Paresseux]. If I had to eat only one dish each night for the rest of my life, this would be it. It’s decidedly simple but comes with a treasure.

Your pan should be lined with bread, ideally thickly sliced French bread. Dorie says one piece and to center the chicken on that one piece. No. Line the whole darn pan with bread. Why? You cook the bird for 90 minutes. Juices from the chicken soak the bread and then, over time, the bread begins to crisp. If you like stuffing, you’ll go mad for this bread. So mad, you won’t want to share it. So, make a lot. A whole pan bottom of it.

For 18 people, we had 3 large chickens and lots and lots of veggies. Plus a massive salad. It was a big feast prepared with each. And relished to the last scrap of bread.

Center a rack in the oven and preheat the oven to 450 degrees F.

Rub the inside of a Dutch oven or other large high-sided casserole with oil and place the bread in the center of the pot. Season the chicken inside and out with salt and pepper. Put the liver, if you’ve got it, inside the chicken and toss in a half sprig of each of the herbs as well as one half of the garlic. Put the chicken in the pot, resting it on the bread. Put the other garlic half in the pot, along with] the remaining herbs, and pour in a few tablespoons each of oil and the wine or water, if you’re using it. Slide the pot into the oven.

If you’d like to roast the vegetables with the chicken, wait until the chicken has roasted for 45 minutes. Then toss the potatoes, carrots, and shallots with enough olive oil to give them a shine, season generously with salt and pepper, and scatter them around the chicken. Roast the chicken undisturbed for about 45 minutes more — a total of about 90 minutes — or until the skin is crackly and crisp and the juices run clear when you pierce the thickest part of the thigh with the tip of a knife. Remove the chicken from the oven.

If you’re feeling really lazy, you can leave the chicken in the pot for 5 to 10 minutes to rest before serving. If you’ve got a bit more get-up-and-go, to get the juices back into the breast meat, put a cereal bowl at one end of a large platter and transfer the chicken, breast side down, to the platter. Let it rest under a foil tent, tail leaning on the bowl and pointing up, for 5 to 10 minutes before serving.

Should you want a little pan sauce — and you’ll only get a little — spoon the vegetables, if you’ve got them, into a bowl, remove the bread, and skim off as much of the fat remaining in the pot as possible. Put the pot over high heat, and then the liquid boils, pour in about ½ cup wine or water and cook, scraping up whatever bits may have stuck to the bottom of the pot. Remove from the heat.

Carve the chicken and serve with the sauce, if you made it.