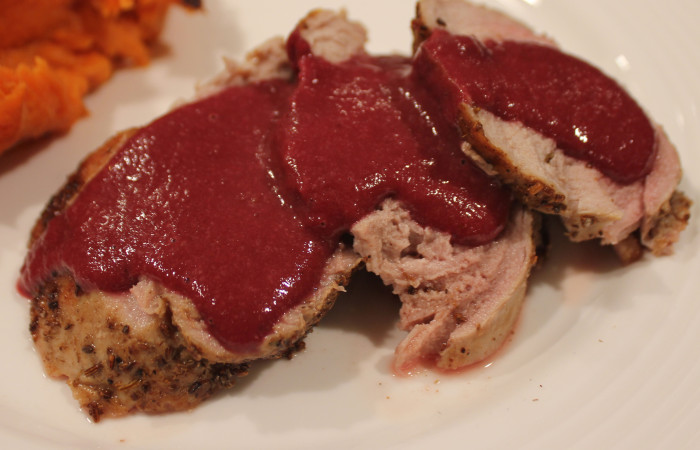 This recipe will show you the full utility of the cast iron skillet you have hanging away. Even before you cook the pork loin, the skillet has had earlier duty roasting fennel seed for the rub that adorns the pork.

This recipe, from The Cast Iron Skillet Cookbook, truly displays the skills of authors Sharon Kramis, Julie Kramis Hearne and Charity Burggraff. Thumbing through the book, Suzen stopped and looked at me.

“This is impressive,” she said. “But …” she hesitated.

Now, I had a recipe already in my mind. I wanted the chicken and dumplings. Suzen has a BIG thing about pork loin. And she loves fennel. When she paused, I knew my chicken would have to wait. I would dream fondly of dumplings.

But, I would get a great pork loin. And, how could I resist blackberry sauce?

The recipe below calls for making the sauce by straining out the blackberries and onions. We have a Vitamix. So, no straining. A few seconds of purring, and we had a velvety sauce that retained all the berries.

This technique of pan-searing meat in the skillet and then finishing it in the oven keeps the meat moist and tender. The searing creates a crust, which seals in the juices. Make the sauce first and then cook the tenderloin. The sweetness of the onions and the tartness of the blackberries complement the savory flavor of the fennel-rubbed pork.

About the sauce. Look for a post for the sauce itself next fall. It pairs perfectly with turkey. Blackberry sauce instead of gravy on Thanksgiving? No, of course not. But, the next day, with leftovers? Excellent idea.

For the blackberry sauce:

Position a rack in the center of the oven and preheat to 350°F.

To prepare the fennel salt for the pork loin, spread the fennel seed in a cast iron skillet and roast in the oven for 6 minutes. Grind in a spice grinder, and then mix with the sea salt in a small bowl.

To prepare the blackberry sauce, melt the butter in a medium saucepan over medium heat. Add the onions and cook, stirring occasionally, for 5 minutes. Stir in the mustard. Add the chicken stock and cook, stirring, for several minutes. Add the blackberries and honey, reduce the heat to medium-low, and simmer until the sauce begins to thicken, about 10 minutes. Strain half of the sauce into a bowl, reserving the juices. Add these juices back to the remaining sauce in the pan. Discard the berries and onions left in the strainer.

To prepare the pork, rub the tenderloin evenly with 1 tablespoon of the fennel salt. Heat a 10- or 12-inch cast iron skillet over medium-high heat. Add the olive oil, and let it heat for 1 minute. Add the tenderloin and cook until browned on all sides, about 6 minutes. Place the skillet in the oven and roast, uncovered, for 20 minutes. Remove from the oven and let rest for several minutes. Pour any excess juice from the cooked tenderloin into the blackberry sauce. Reheat the sauce quickly. Slice the tenderloin crosswise, arrange on a platter, and spoon the warm blackberry sauce over the top.