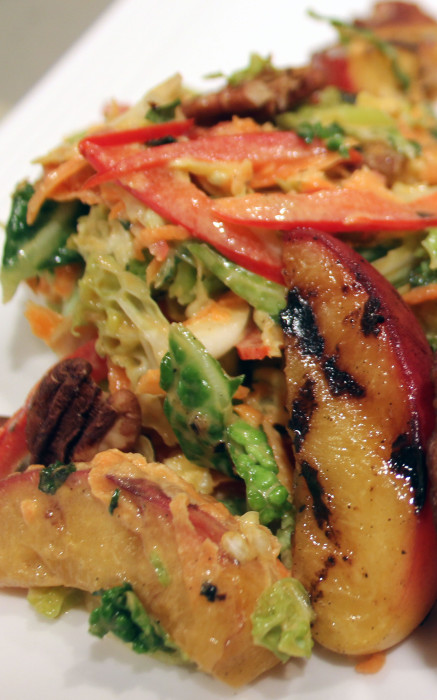 Cole slaw comes in a zillion forms, most of them bad, or not terribly healthy. Or both.

I sometimes am tempted by the heaping mounds of glimmering slaw in the counter at a market, I take a plastic carton home, I taste the slaw, and then in frustration I go to my pantry. My internal conversation begins with, “If I just put in some vinegar and lots of pepper and …”

It’s really just easier to start from scratch. It really is. You are controlling flavor then, not undoing someone else’s. And, as summer winds down, you still have the chance to make your slaw very summery and special. I have avoided the temptation to call this slaw “just peachy” but it is. And I have not avoided a bad pun after all, have I?

No matter. Grilling fruit is something that many of us have an adverse reaction to or certainly a forgetful reaction. I just don’t think about grilling my fruit. I’m from Oregon, not Brazil. [Bananas Foster is something else; I think about that all the time.] But this Grilled Peach Slaw is the perfect avenue to begin breaking old habits and starting new ones. Cooked peaches, especially grilled ones where caramelization begins to take place, have a “doubled-down” flavor that make this slaw extra flavorful.

If you are grilling this weekend anyway, scoot that meat over to the side a bit. Clean the grill. Get it hot. And get some peaches ready for a slaw you won’t find in your local market.

Set an outdoor grill to medium-high heat. Or use your indoor stovetop grill or a grill device atop the burners.

Coat the peaches with cooking spray; season with ¼ tsp of the salt. Grill, cut sides down, 6 minutes, turning once with a spatula, until lightly marked. Remove to a cutting board and cool. Cut into thin wedges.

In a large bowl, whisk mayonnaise, vinegar, honey, mustard, the remaining ¾ tsp salt, and pepper until blended. Add peaches, cabbage, and the remaining ingredients except pecans; toss until evenly dressed. Can be made up to 4 hours ahead and refrigerated. Just before serving, stir in pecans.