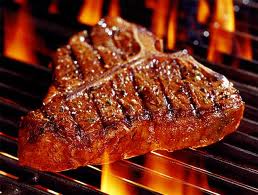 While nothing beats a great steak, we often struggle to attain that greatness. How often have you, or someone at your table, reached for salt, and salt, and salt, to get the flavor boost you are convinced that steak needs.

Of course, there are the endless lines of bottled steak sauces all there for you to try, too, all designed again to somehow “add flavor.” And when we try a sauce, nobody does it a teaspoon at a time. That steak, fresh off the grill, may often find itself drowning in sauce.

So much sauce that you can end up eating sauce with steak on the side. The meat flavor is lost in what came out of that bottle: tomatoes, vinegar, onion, salt, herbs, more salt, …

Yes, I’m on a salt kick but only because my doctor told me so. Here’s a path to a perfectly satisfying  steak that works and that is easy.

First, turn the grill on and get it hot. Grilling the steak is, for many of us, the only way to prepare our meat.

Second, a half hour before you grill, take the steak out of the fridge and let it come to room temperature. Don’t cook cold. The temperature shock when cold meat is plopped on a hot grill can result in tissue breakdown that destroys the texture of the meat.

Third, during that half hour, coat the steak in a little olive oil and then liberally salt and pepper each side of the steak. By “liberal” I’m talking about a teaspoon a side at most. This is the last time your steak will see salt, by the way.

Fourth, grill away to reach you doneness standard. There’s a “four minutes a side” rule which of course ignores steak thickness and therefore is really not a universal rule. It’s a few minutes a side, though, not several. You do want some redness inside and you do not want to create shoe leather.

Fifth, pull the steak off the grill and do NOTHING. Give it a five minute rest. Now is the time to finally open that bottle of wine, or pour yourself another glass.

Last, plate the steak and serve. Take  2-3 teaspoons of cold butter and drop them on the top of the steak. As the butter melts, squeeze half a lime over the flowing butter. Just half. Pick up your knife and fork and consume away.

Steak sauces generally tend to have a “sour” flavor to them. That “sharpness” is supposed to complement the meat. Well, with this butter-lime technique you cut to the quick. The butter adds richness, just as it would if the steak were pan cooked and then the juice converted into a sauce using, of course, butter. The lime juice gives you that seemingly hidden “brightness” you want  — it really does amplify the flavor — but without all the complex baggage of the “other” flavors that come in those bottle sauces. You’ll taste meat now, not the complex array of tones coming from the bottle.

Miss your sauce? Want to used it anyway? Put in on your baked potato. There, the best of both worlds.