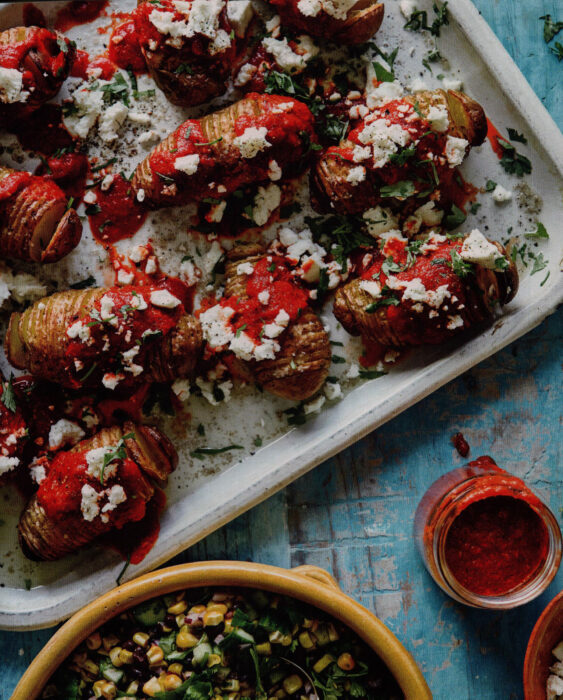 I never saw the term “Hasselback Potatoes” until about a year ago. Now, they are an institution in many books. And that’s a good trend.

What is a Hasselback potato? It’s a baked potato where the potato is sliced vertically many times before going in the oven. You make cuts mostly but not all the way through, about ⅛th inch or so. Then you bake for at 425° F for about 40-50 minutes. The cuts allow the hot air to address the “wedges” and give you a most crispy result.

Before baking you brush the potatoes with olive oil and can then drizzle on some salt, pepper, and/or herbs like rosemary and thyme.

Out of the oven, many recipes call for a finish of butter or sour cream. Or, you can follow this suggestion from Mob Veggie. Adorn the potatoes with both Peri Peri Sauce and crumbled feta cheese.

Peri Peri may sound like a South Seas drink but it’s a staple sauce in Portugal and Africa. Portuguese probably discovered the sauce in their pre-Columbus explorations and have certainly refined it over the subsequent centuries.

It’s hot. The African version uses Bird’s Eye Chilies. This recipe calls for “hot red chilies.” Use your favorite and your discretion.

Oh, yes. Where did Hasselbeck potatoes come from? The are the creation of one Leif Ellison, a trainee chef at the Hasselbacken restaurant in Stockholm back in 1953.

It is a signature dish and technique, one you should explore.

Prep the potatoes. Carefully make small vertical slits, about ⅛ inch apart, three-quarters of the way down each potato, all the way along. If you can make smaller slices, feel free.

Add the potatoes to the roasting pan. Drizzle with olive oil and season well with salt and pepper. Roast in the oven for 50 minutes or until golden and crispy.

Start the Peri Peri sauce. In another roasting pan, add the seeded, roughly sliced red peppers, the sliced red onion, and 1 lemon [halved, cut side down]. Drizzle with olive oil and put the pan in to the oven for 45 minutes.

Meanwhile, add your corn to another roasting pan, drizzle with olive oil, season with salt and pepper, and roast in the oven for 30 minutes, turning every 10 minutes.

Once the potatoes are nice and crispy, remove them from the oven and set aside.

Complete the peri-peri sauce time. Add your roasted peppers, onion, and pulp from the lemon to a blender. Add 2 grated garlic cloves, 2 teaspoons of dried oregano, 1½ tablespoons of red wine vinegar, the chilies, salt, pepper, and a drizzle of olive oil. Add the zest and juice of a fresh lemon. Whiz together to make your smooth sauce.

Remove the corn from the oven. Slice the corn kernels from the cobs and drain and rinse the black beans. Chop up the cucumber and mix with the beans and the corn kernels, a handful of chopped coriander, the juice of half a lemon, a little olive oil, salt, and pepper.

Load the potatoes with the sauce and add the crumbled feta. Scatter chopped cilantro on top and serve up with the corn salad on the side.