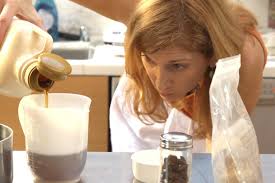 If you are a fan of the Wednesday New York Times Food Section, as I am, then you recognize that picture above. Red hair, strong nose, wide eyes, and studied intent. Melissa Clark is my favorite Times writer. When I pick up the Wednesday paper, I scan first for her. Does she have an article this week? Yes, wonderful. No, hell, now what do I read about? The Crimea? The Mexican border? I need Melissa.

Beyond her Times work, Melissa has well over two dozen cookbooks under her apron, mostly as co-author. Why has she teamed up with so many prominent chefs to co-write an entire shelf of books? It is not just that she is a gifted writer. It is that her writing reflects a sense of organization and priority that makes cooking transparent to so many of us. Melissa is always inviting and always exceptional. Just calm and simple and understated.

Until last week. Her article on ice cream bases was called “A Frozen Canvas, a Spectrum of Flavors.” But the headline on Page 1 of the Food Section said, “The Only Ice Cream Recipe You’ll Ever Need.”

Those are fighting words. In essence, the Times is calling this the best ice cream recipe. Now, food writers deal in two things: food and adjectives [and adverbs, too]. So we talk about “good, grand, exceptional, top, marvelous, sublime, …” We don’t say "best" because someone is going to respond with an email. And someone else, and someone else, and … It can be savage.

Suzen and I make a lot of ice cream. In the summer, her culinary team building events almost all end with ice cream of some sort. So we naturally wondered what made Melissa go out on a literary limb. Her whole recipe is at the end of this post, but the key thing is her ingredients:

I wondered how this recipe would compare to one from my ice cream bible, David Lebovitz’s The Perfect Scoop, simply the best ice cream book of recent history. I went to his vanilla ice cream recipe and I found ……… exactly the same ingredients.

Well, almost exactly. He wants ¾ cup of sugar. What’s the difference between ¾ and ⅔? It is a mere one tablespoon of sugar. And in a mixture that yields 1 quart of ice cream, I for one would be hard pressed to tell you the difference. The cold, the richness of the diary and any flavoring like vanilla would simply preclude my being able to distinguish between the two sugar amounts.

If, by chance, you can tell the difference then you should open a new browser window and look for a great career opportunity in food testing and flavor creation. There are people out there who want your tongue and nose, and will take the rest of you as a necessity.

I checked other sources, both books and on the web, and I have to say that this mix of ingredients is one that many would agree is top of the heap. There are variations, of course. In his authoritative [and useful] book The Ultimate Ice Cream Book, Bruce Weinstein calls for a full cup of sugar, no milk but 1 ½ cups of half-and-half, one cup of cream, 7 egg yolks. Suzen and I are going to have to take that one for a test drive and do the comparison.

Finally, I looked at two standard references, The Joy of Cooking and The Gourmet Cookbook. Suzen, as a point of full disclosure, has about three years of time spent being the test kitchen for the last two editions of The Joy, a book conceived in Depression-Era America. The vanilla ice cream there has 3 cups of heavy cream to 1 cup of milk, but no egg yolks. Right below that fundamental recipe though is one for French Vanilla, which matches Melissa except for using only 2-3 egg yolks. And that same recipe is what you will also find in The Gourmet Cookbook.

So, with modest differences, a lot of authorities want a 2:1 ratio of heavy cream to milk. And egg yolks, from a few to many. Melissa explains that you can vary the number of egg yolks from 2 to 8; with fewer yolks you add more milk to compensate for liquid volume. And the amount of sugar, she admits, can vary. In fact, to match that eggy yellowness, you can substitute some honey for the sugar. More eggs mean a richer flavor, and more yellow color, too.

When I was growing up, there was a Chinese restaurant with a short menu but a long refrigerator case filled with ice cream. They realized that their deep fried fan tail shrimp did leave an aftertaste. I must have been ten when I had my first. French vanilla that is. Rich and eggy and distinctly yellow. Once you have discovered the power of egg yolks, you don’t return to plain old vanilla. Which by the way, has a name: Philadelphia style ice cream, no egg.

Lovely city, great museums, interesting food, but they just never learned the power of the egg.

If Melissa wants to call this the only ice cream base you need, if she wants to call it the best, then all you have to do is taste and agree.

Here is  the recipe with instructions. This recipe is for a base that you can flavor countless ways. Vanilla of course but in her Times article Melissa provides 16 flavoring ideas with aromatics like vanilla, fruit like peach and strawberry, chocolate aplenty and a forest of nuts. You can spend your entire ice cream summer just working with this marvelous recipe. The best.

Oh, one last little thing. Eight or seven or six egg yolks? What to do with the egg whites? Search for meringue on this website and you’ll find [currently] 38 other recipes for using the egg whites in meringues, many of them from Meringue by Linda Jackson and Jennifer Evans Gardner. Good book.

In a small pot, simmer the cream, milk, sugar and salt until the sugar is completely dissolved, about 5 minutes. Remove the pot from the heat. In a separate bowl, whisk the egg yolks. Whisking constantly, slow whish about a third of the hot cream into the yolks, then whisk the yolk mixture back into the pot with cream. Return the pot to medium-low heat and gently cook until the mixture is thick enough to coat the back of a spoon [about 170 degrees on an instant-read thermometer].

Strain through a fine-mesh sieve into a bowl. Cool the mixture to room temperature. Cover and chill at least 4 hours or overnight.

Churn in an ice cream machine according to the manufacturer’s instructions. Serve directly from the machine for soft serve, or store in the freezer until needed.