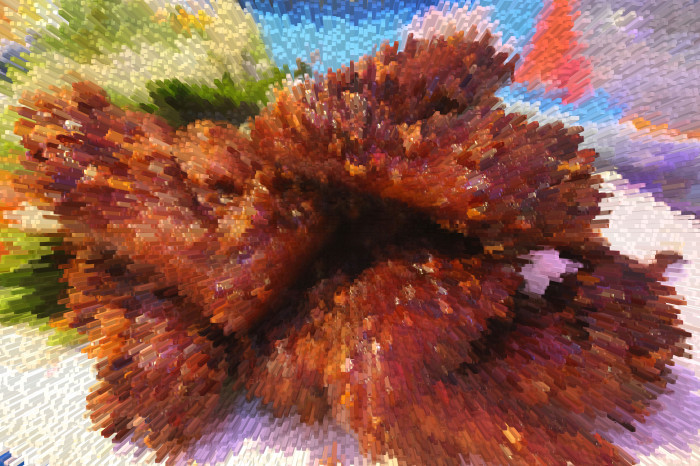 Pok Pok in New York City and Portland is famous for its chicken wings. Which it turns out are actually Vietnamese. That picture above is representative of your mouth and brain after couple of bites. Actually, the wings are equally sweet and hot, so the overall effect is not mouth‑destoying. Yes, the photo above was created with Photoshop. The original photo is at the bottom of this posts and, yes, it is out of focus because I took it while still trying to chew a wing.

If you ever go to a Pok Pok restaurant, the wings are a must. If you get this lovely cookbook, this should be the first recipe you try.

The wings are not only sweet and hot, they are sticky. So, be prepared to wipe down that bottle of beer you have on the side. And, uh, a full bottle it should be. Here is the total text of the recipe from the Pok Pok cookbook, including the extensive headnote from author Andy Ricker. The details he provides for each recipe in Pok Pok are outstanding and do make this an “exotic” book you can master at home.

I've spent the better part of the last twenty years roaming around Thailand, trying to figure out how to reproduce Thai food. To me, that's what Pok Pok is all about. Yet, the most popular item at Pok Pok isn't even Thai. I get a kick out of the irony.

These wings basically pay our mortgage. They allow me to take risks with the rest of the menu. Because even if you're apprehensive of the fire and funk of Isaan-style papaya salad or by shrimpy, sour kaengsom, you'll leave impressed by the thrill of these ridiculous umami bombs.

The wings happen to be a rather common dish in Vietnam called gochien nudemam. Right before I opened Pok Pok, I tried to make a version I had eaten once in Saigon at a bia hoi stand. Bia hoi is often translated as "fresh beer" in Vietnamese, and little street-side stalls with comically low plastic tables and stools sell the watery, low alcohol lager by the jug for cheap. You sit there, knees up around your ears, drinking the beer over ice and burning through delicious little snacks that help you pass the time required to get a buzz off bia hoi. By the time I'd sucked clean several orders of the wings, I knew I wanted them on the opening menu.

Back in Portland, I took a few swings and misses at the recipe before enlisting the help of Pok Pok's first employee, Ich Truong (who I nicknamed "Ike" because "Ich" is too hard for us honkies to pronounce). A recent arrival from Vietnam, Ike is an all-around handy guy who first joined my painting crew(when I was still working as a house painter) and then joined me in the trenches to open the restaurant. (Literally, in the trenches. We once had to dig one so deep to find a drain pipe that he disappeared into it.) Not only did he help me build the restaurant, but he's also a good cook, and showed me a few tricks that helped the wings reach the level they're at now. We still work together today.

Making a home version requires some deviation from the method we use at the restaurant, where we have industrial deep-fryers and serious BTU fire power. Nevertheless, the result of this streamlined recipe comes pretty close to what you get at Pok Pok with about half the effort. If you're making the spicy version, open a window and turn on the stove's exhaust fan.

Make the Sauce and Marinate the Wings:

Very finely chop the garlic, sprinkle on the salt, then chop the two together for 15 seconds or so. Scrape the mixture into small bowl, add the ¼ cup of warm water, and let it sit for few minutes.

Set a fine-mesh strainer over another bowl, pour the garlic mixture into the strainer [or squeeze the mixture in a cheesecloth over the bowl], and use the back of a spoon to stir and smoosh the garlic to extract as much liquid as you can. Reserve the garlic. Add the fish sauce and sugar to the bowl and stir until the sugar has fully dissolved. You should have 1 cup of liquid.

Put the chicken wings in a large mixing bowl, add the ½ cup of the fish sauce mixture, reserving the rest, and toss well with your hands. Cover and refrigerate for at least 4 hours, or as long as overnight, tossing very hour or so.

Meanwhile, pour enough oil into a small pan to reach a depth of ¾ inch or so and set it over high heat until it shimmers. Set a fine-mesh strainer over a heatproof bowl. Test whether the oil is hot enough: as soon as a piece of garlic added to the oil bubbles right away, add the rest. Decrease the heat to medium-low [you don’t want to rush the process with high heat], and stir once or twice. Cook the garlic just until it is evenly light golden brown, about 5 minutes. Strain the garlic, reserving the flavorful oil for another purpose. Gently shake the strainer, then transfer the garlic in more or less one layer to paper towels to drain and cool. You should have 2 tablespoons of fried garlic. It keeps in an airtight container at room temperature for a day or two.

Transfer the wings to a colander in the sink, shaking the occasionally, to let them drain well before you fry them, at least 15 minutes.

Pour enough of the oil into a wok, Dutch oven or wide pot [even better, use a countertop deep fryer] to reach a depth that will completely submerge the wings, about 2 inches. Set the pot over medium-high heat, bring the oil to 350°F [use a deep-fry thermometer], carefully stirring the oil to maintain a consistent temperature, and adjust the heat to maintain the temperature.

In a large mixing bowl, stir together the rice flour and tempura batter.

Fry the wings in two batches. Toss half the wings in the flour mixture to coat them well and knock them against the edge of the bowl so any excess flour falls off before adding them to the hot oil. Add the first batch to the oil and cook, prodding the wings to move them around a bit after 4 minutes or so and then every few minutes, until they’re cooked evenly deep golden brown and completely cooked through, 6 to 8 minutes. Transfer them to paper towels to drain, let the oil come back to 350°F, and do the same with the next batch.

Add the ¼ cup of water to the remaining fish sauce mixture, stir well, and set it aside.

Work in two batches to finish the wings [if you have a very large wok, one batch will do]. Combine ¼ cup of the fish sauce mixture and half of the chile paste [if you are using it] in a nonstick wok, set it over high heat, and bring it to a boil. Cook until the mixture has reduced by about half, about 45 seconds. Add half of the chicken wings and cook, using tongs, a wok spatula, or a deft flick of your wrists to toss the wings in the liquid every 15 seconds or so, until the liquid has become a sticky, caramel-colored glaze that coats the wings, about 1 minute. Add 1 tablespoon of the reserved fried garlic, toss well, and keep cooking, tossing constantly, until the glaze has turned a shade or two darker, about 30 seconds more.

Transfer the wings to a serving plate. The sticky coating seals in the heat, so the batch of wings should keep warm while you finish the next one. You can also keep the first batch in an oven set to warm.

Serve the wings with the pickled vegetables, cucumber spears, and herb springs. 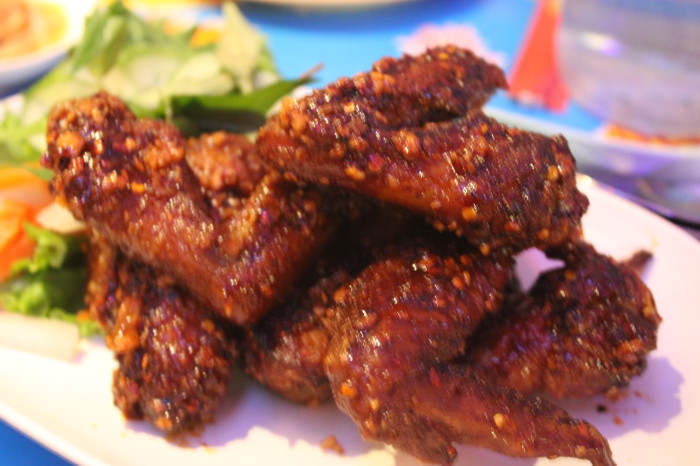