The Science of Mashed Potatoes: Why Robuchon’s Recipe Works [Don’t Skimp on the Butter!] 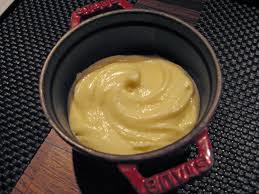 You know that you cannot have Christmas dinner without mashed potatoes. You could to it, but it would be wrong. Yeah, you can do scalloped and cheesed and God-knows-what but you have to have them mashed.

There’s a consensus that the best recipe comes from Joel Robuchon. I’ve blogged those here before but I found this great site:

Here they discuss in minute detail how to make the Robuchon recipe, including the choice of Ratte potatoes for their particular nutty flavor. The “Americanized” version of the widely circulated Robuchon recipe was written by Patricia Wells and uses half the butter that the real French recipe uses. Go French, not American.

You’ll have to accept that making these mashed potatoes here in the United States will give you a wonderful product, but not the original one. Remember how they talk about terroir for wine? The effect of sun and soil on the grapes? Well, terroir applies to everything, including potatoes. And then there’s the butter. Americans produce great butter. The French produce the best butter in the world. As a New Year’s Resolution, I suggest you plan a trip to Paris.

But, but, go to this site and follow the directions and you’ll think I’m paranoid and you’ll be perfectly satisfied.

And, there’s more. This site presents the mashed potato recipes from several great chefs so you can compare, contrast and perhaps concoct: