Soup of Dill Pickles, Potato, Smoked Sausage, and Bacon from Big Flavors from a Small Kitchen 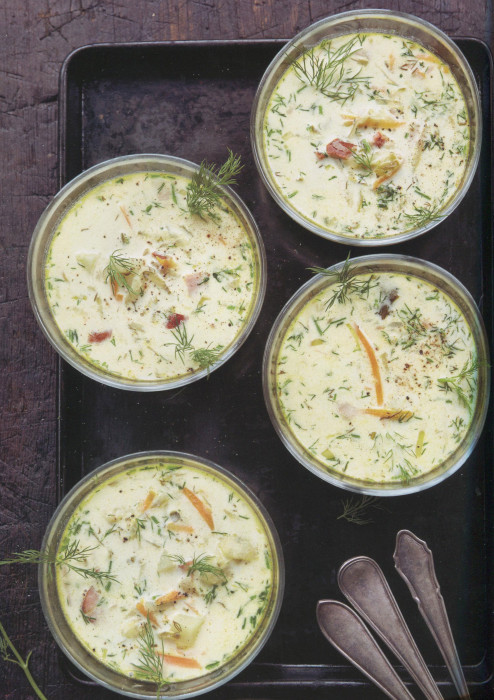 The recipe comes from Big Flavors from a Small Kitchen. Author Chris Honor was born in Australia and now has a small restaurant in North London. He calls this recipe Polish Potato Book but originally he called it Pickled Cucumber Soup. That name did not make is a best seller, but the Polish title makes it the favorite of is happy customers.

This soup has four primary ingredients: grated dill pickles, potatoes, smoked sausage and bacon. The last three you might expect but the grated dill is a surprise. Chris has cooked from his native Australia across Asia and the Middle East to London. He’s seen pickles used from one nation to another across the continents. This recipe is from one of his chefs whom Chris describes as a gem. And, Chris adds, this soup is a gem, too.

It’s easy to make. The ingredient list is modest. The directions are just four short sentences. It may be a gem, it may sparkle, but it is easy.

In a large pan, combine all the ingredients, except the dill, cream, and orange zest, and bring just to a boil. Lower the heat and cook very gently for 3 hours, uncovered.

Just before serving, add the remaining ingredients and stir. Taste, adjust the seasoning, and serve.