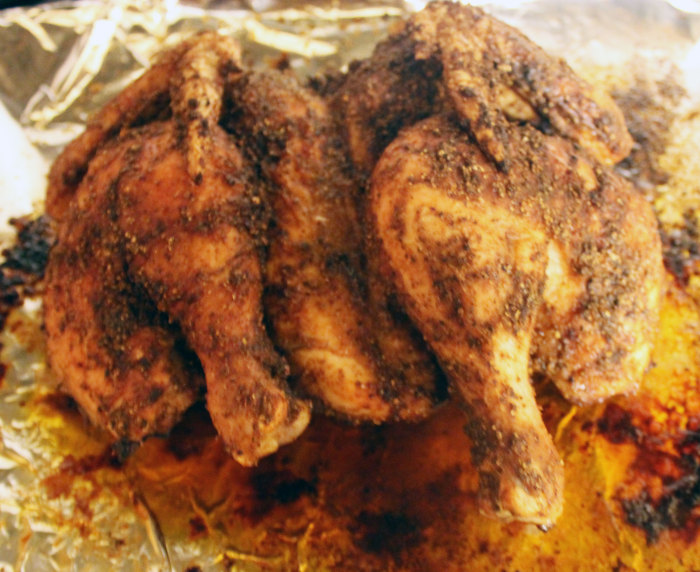 Yesterday I posted about making chorizo at home. You achieve better flavor and a spice/heat level that nothing in the store can match. It is, in a word, a fun recipe.

Now, I did note that the spice recipe is about as explosive as a block of C4. You know, the plastic explosive used in every movie except the ones made by Disney.

We had taste tested, and although Suzen made lots of the spice mixture, we wisely did not put any extra spices into the chorizo mix.

Consequently, we had leftover spices. Suzen can deal with leftover this and leftover that, but spices are something else. She has this itch to use them, to use them now before there is any loss of flavor.

We happened to have a defrosting free range chicken, we had the spices, and I had scissors. Suzen loves the look of a spatchcocked chicken. There are times when she has threatened to spatchcock me, but I believe the letters from my attorney have quietly ended that phase of our marital relationship.

When you spatchcock a chicken, you cut down the backbone, actually take out the backbone if you can, and fold the bird flat. Where did the word come from? I am happy to say that it is Irish and dates from the 18th century with appearances in Irish cookbooks of that time. What does the term mean? One theory in the Oxford Companion to Food, and other sources, is that it stands for “dispatch the cock.”

Given the nature of Irish women, and their men, and the whiskey, I suspect there is another meaning.

A spatchcocked bird cooks in less time and you’ll be more likely to have moist, and not dry, beast meat. Taken to the table, a spatchcocked chicken makes a thrilling, if not threatening, presentation.

I did the spatchcocking, Suzen applied the spice run and we roasted away. The flavor was hot, the skin addictively divine.

Yield: enough for a chicken

Place all the ingredients, except the lemon juice and salt, in a cast iron pan over medium heat. Toast until softened and aromatic. Keep moving the item so you don’t burn the garlic.

Remove from the stove and put in a food processor. Pulse until well dismantled but not powdery. Add lemon juice and salt to fit your flavor profile.

Store in an airtight container until used. Use quickly to take advantage of the freshness.