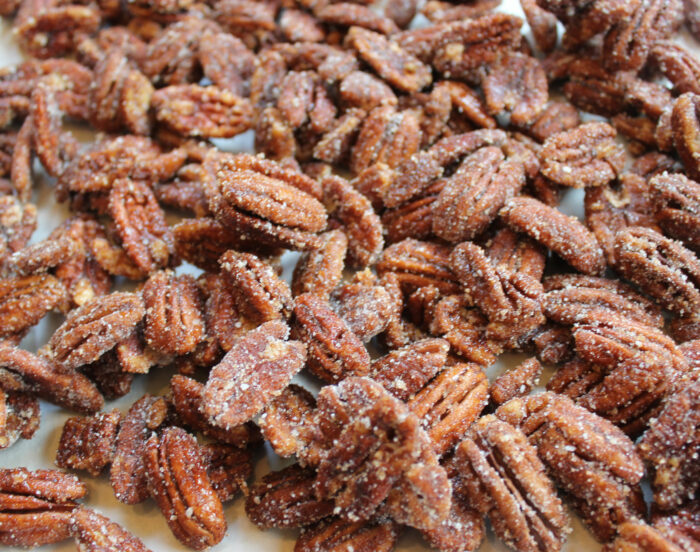 I don’t know why we eat spiced nuts primarily in this holiday season. But that’s the pattern.

I’ve tried many recipes with some success. A friend from Texas, for example, is a pecan maven. His are firey. And someone from the Five Towns on Long Island is an elegant entertainer who has all her ducks in a row, including her nuts. An interesting blend of spices for her. Me? I want heat. I want spice. I want sweetness.

From cookbooks, Suzi and I have tried many recipes. Many. This one from The Thanksgiving Cookbook, 1991, is quite different and most successful. The balance of sweetness, heat, and spice is very interesting. I think they are a bit better on Day 2, and surely hotter then too.

I would suggest you make these following the recipe. Taste test them over a few days — if they last that long. Then, the next time, adjust the spices to your liking.

The result here is different for a couple of reasons. One, you literally cook the pecans in butter for twenty minutes, stirring often. Two, you use confectioners’ sugar, not granulated. Very sweet, but not as sticky.

Melt the butter in a large skillet over medium-high heat. When hot, add the pecans and reduce the heat to low. Cook, stirring frequently, for 20 minutes. Removed the pecans with a slotted spoon and drain on paper towels. Meanwhile, mix the sugar, cloves, cinnamon, and the nutmeg in a medium-sized bowl. Add the warm pecans and toss until completely coated. When cool, store for up to a couple of weeks in a tightly covered container or plastic bag.