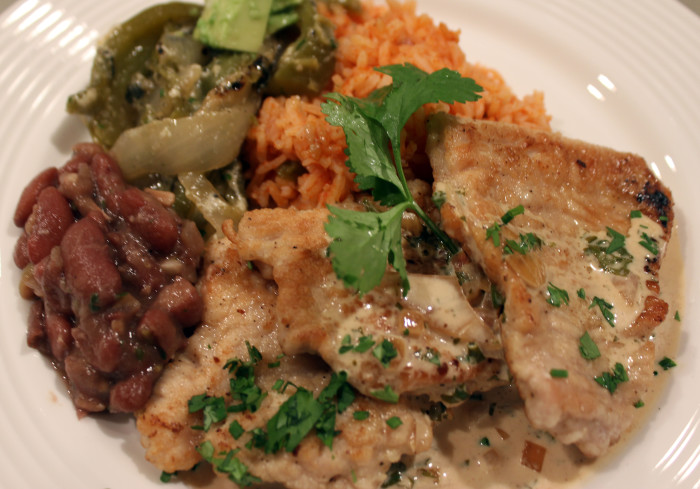 Tomorrow is Super Bowl Sunday with an honest team, the Seahawks, and a suspicious team, the Patriots, finishing the season in Phoenix. The game should be exciting and exceptional. And, of course, deserving of superior food.

If wings or ribs or nachos seem too “snacky” for you, if you want a full meal, then consider that Southwestern plate you see above:

I’ll leave it to you to figure out how to roast the tomatillos, or perhaps some onions and poblanos in the form of caramelized rajas:

For everything else, the recipes are right here. You can cook during the afternoon, keep everything warm, and serve whenever you want. For Suzen and me, food has to come during the half time show, which we listen to but don’t have to actually “see.” We do have to see every play of the game and of every commercial.

Some years the commercials almost, just almost, outrank the game. Tomorrow ain’t gonna be one of those days.

Pound each medallion between sheets of wax paper to ⅛-inch thickness.

Heat 2 tablespoons butter in a large skillet and sauté the turkey over medium-high heat until golden brown, about 2 minutes on each side. Transfer to a platter and keep warm.

Add lime juice and tequila to the skillet and simmer for about 3 minutes. Add remaining butter and stir until smooth.

Stir in cream and coriander and simmer for another 3 minutes. Add cilantro, chives, salt, and pepper and stir. Remove from heat.

Pour sauce over turkey medallions. Garnish with sprigs of cilantro.

Source: Gourmet LA by the Junior League of Los Angeles, 1988

Heat the oil in a large heavy saucepan. Add the onions and sauté, stirring, until coated with oil. Cover and cook over very low heat, stirring occasionally, until golden brown, about 15 minutes. Stir in the garlic and sauté uncovered, for 3 minutes.

Drain the beans, then add them and the broth to the onion. Heat to boiling and cook, covered, over low heat for 2 hours. Add the bay leaves and cinnamon. Cover and continues to cook until the beans are very tender, about 1 hour. Season with salt and hot red pepper sauce and add tequila. (The beans can be prepared up to 24 hours before serving. Reheat, adding additional broth if necessary).

Heat 1 tablespoon of oil in a heavy saucepan. Stir in the onion and garlic, and sauté, stirring, just until tender, about 5 minutes. Stir in the rice until coated with oil. Add the water (or broth and water) and salt, then heat to boiling. Cover and cook the rice over medium-low heat until the liquid is absorbed and the rice is tender, about 15 minutes.

Heat the remaining 2 tablespoons of oil in large skillet. Add the carrot, celery, and red onion, and sauté, stirring, until tender but not browned, about 5 minutes. Add the green pepper and sauté until crisp-tender, about 2 minutes. Set aside.