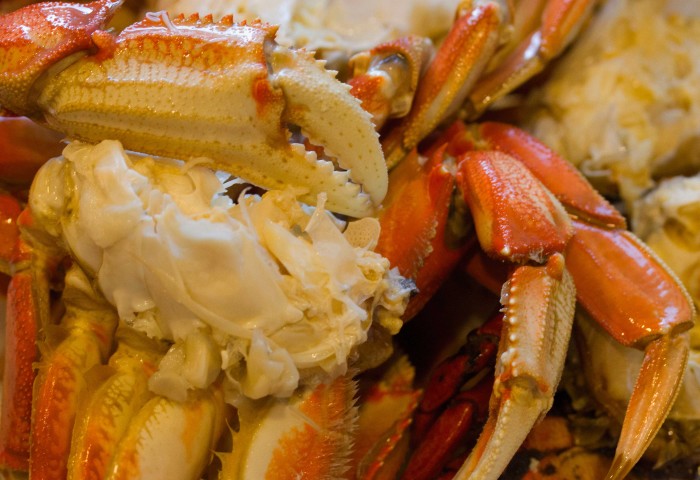 While half of all marriages end in divorce, no marriage of corn and crab ever has. Be it in a salad, a dip, a soup — or some other creation — the two flavors seem to automatically merge into one overpowering burst of pleasure. This dip is rich, so it can serve as the centerpiece for you cocktail party appetizers. This dip is rich, so you really don’t want to “make a meal” of it.

Although, some of us …

Everything in moderation. I’ve adapted the recipe from the one in Comfort Foods by Better Homes and Gardens. Here I suggest fresh corn and fresh crab. Try to get your crab from one of those pictured crab legs, meaty and moist. Canned crab simply does not have the vitality of freshly cooked.

This recipe calls for Monterey Jack with jalapeno, but you can easily use another cheese of your preference and, again if you wish, add some heat with sliced jalapeno or other hot peppers. Adjust the amount of onion, if you desire, and the color as well: red or white instead of green. For some non-jalapeno zip, a single diced clove of garlic can be substituted. A dash or two of hot sauce will simple seal the deal between crab and corn.

If you were to use an abundance of cheese — 2 cups instead of 1, so the bubbly mass at the end is rather fluid, then you have an excellent adornment for baked potatoes.

Preheat an oven to 375°F. Coat a 1-quart quiche disk or shallow baking dish with cooking spray and set aside.

Heat a small cast iron skillet on medium-high and add two tablespoons of olive oil. Add the corn and red pepper. Cook stirring constantly until the pepper has softened and the corn kernels are still al dente. You goal is to have pepper pieces and corn kernels just past the first point of being comfortably eaten.

In a medium bowl stir together crabmeat, cheese, mayonnaise, sour cream, green onions, and black pepper. Stir in the cook pepper and corn. Transfer the mixture to the prepared quiche dish.

Bake, uncovered, about 20 minutes or until bubbly around the edges.

Served with the broken tostada shells, toasted bread, or cracker.

Source: modified from Comfort Food by Better Homes and Gardens