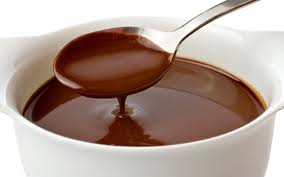 This post has already appeared a couple of years ago, but I’m showing this vital information to you again because in about 48 hours the panic is going to set in. You’ll want information immediately. Search will not be something you want to do.

It is not that hard to make very, very seriously delightful gravy. You need a little time and you have to be organized. Here are all the details and steps to give you total gravy confidence.

In a nutshell, here’s what you are going to do. You are going to make a roux — yes, just like in Cajun feasting — then add some flavored liquid, cook to allow it all to thicken, and eat. That’s all you have to do.

A roux? A roux is just a cooked mixture of fat and flour. By cooking the two ingredients you create a substance, the roux, that simply loves additional liquid. The cooked roux literally unwinds in the liquid and thickens it — my thanks to Alton Brown for the food science here.

There is one key secret: the roux is made in the same pan you roasted the turkey in. When you lift the turkey out, don’t dare clean that pan. Pour the liquid out into a measuring cup, or better yet one of those fat separator utensils.

With the liquid pour out, that roasting pan is literally littered with flavoring bits. They are the third, “secret” ingredient for you roux.

One last tip for you, when you make the roux, and are cooking the fat and flour, the longer you cook the darker and more flavorful the roux becomes. Cook for about 10 minutes and you have a “white roux.” Cook for 20 minutes or more and you have “brick” roux. White tastes fine. Brick will probably bring tears to your eyes. I made a brick roux once that I still remember, and have never been able to duplicate.

But there is a tradeoff. The longer you cook, the darker the roux becomes, the more flavor it will have, but the less thick gravy it will make. That over-the-top brick roux is only 25% as effective as a white roux at thickening. So, you need to ponder how much flavor you want versus how thick you want your gravy to become. And of course, as you cook the roux and it becomes darker, there is no way to “uncook it” to get back to a lighter color. Gravy making is a one way street.

This is the key reason why you can make gravy a hundred times and always end up something good but a tad unique. You haven’t failed. You’ve just been part of a chemistry experiment.

Decide on how much gravy you want. For each cup of gravy, use one tablespoon of the fat that is sitting in that measuring cup or separator you pour the pan juice in. Put the fat into your pan, turn heat to medium, and begin stirring.

You can begin to add flour. Here, you’ll find recipes differ substantially. Typically, it’s one tablespoon of flour for each tablespoon of fat you’ve already added. But other recipes will say a tablespoon and a half or even two tablespoons. More flour should give a thicker gravy. Regular AP flour is fine, but Alton Brown recommends cake or pastry flour!

Cook the fat and flour over medium heat, constantly stirring. If your roasting pan is large, you may want to place it over two burners and have both them going. Keep stirring until you reach the color you desire. When the mixture bubbles, you are “done.” If the roux is not yet at the color you want, lower the heat a bit, keep cooking to change the color and adjust the heat so that you do get to a bubbling liquid.

Now add your flavored liquid, one cup for each tablespoon of fat you added. In that measuring cup where you put the pan liquids, the fat has floated to the top and you’ve used some of that fat to start the roux. Pour off the rest of the fat, and use the liquid in the bottom of the cup as a starting point. You’ll need additional liquid. You could use water, but you shouldn’t. You want chicken or turkey stock.

Cook and stir. Slowly let the mixture come to a boil. It will have thickened along the way. Add salt and pepper to your personal taste.

Remove from the heat. Serve and savor.

Source: inspired by Holly Garrison in The Thanksgiving Cookbook and Alton Brown in I’m Just here for the Food.