Tiger’s Milk and a Cookbook Review of LEON: Family and Friends 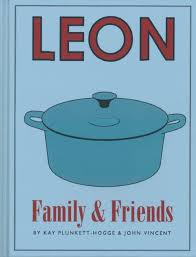 Here’s the thing about New York City. It’s actually pretty small. I can prove that.

Thursday night Suzen had finished a Cooking by the Book team building event for a client, 40 people cooking in our kitchen. Loud fun. They had started early, so they were all out the door by 8PM. The longest day of the year was about to hit, and there was still plenty of light.

I did not have to ask because “the walk” is four short blocks down and three long ones west to Hudson River Park. The sun was low and the Jersey City buildings were glass shields reflecting the dark red glow of that departing sun. We have a four mile route we usually take.

“We doing it all?” I asked. Hell, I was tired from just watching her all day. I did not want to walk to The Battery.

I was relieved and we sat, enjoying the red and golden hues slowly darken across a Hudson River that was now Baltic blue, topped with grayish whitecaps from the perfect breeze. It was all still and quiet.

“Suzen, is that you?” a voice asked. It was our good friend Stephen Schmidt, so good that we had not seen him in three years. He had just picked that night to walk 6 miles down from East 86th street. And he just happened to be there by the river when we were.

Stephen wrote Master Recipes in 1987. We always have 20 copies around, giving them away as prizes at Cooking by the Book. His next book is in progress, as authors will say. I keep a hopeful wait.

“What are you doing now?” Suzen asked. And now it got quite interesting. Stephen is working for a foundation to “rescue” old cookbooks. They are working with books before 1865 because Stephen told us that is the great divide. Before then, most English language cookbooks were written in England and imported here. After 1865, as the Industrial Revolution began in the US, as the railroads were completed, and as the land west of the Mississippi finally populated with farmers and small towns, Americans began to write their own books.

“After 1865,” Stephen said, “there is really a divide. It’s two cuisines, two philosophies, not one anymore.”

Yes. Today there surely is a great difference between American and British cuisines, recipes and cookbooks. To begin with, in Britain you buy a cookery book and you go to cookery school. That’s just the beginning.

While English cuisine has been derided by commentators and comedians for decades, the fact is that if you can eat in any Gordon Ramsey restaurant in London [or elsewhere] then  do. Magnificently perfect. Yes, the London Indian restaurants are wonderful. And the Chinese.

And that indigenousEnglish food? It’s quite good, distinctively not American, yet something you very much want to add to your repertoire.

Which brings me to LEON. A collaboration of Kay Plunkett-Hogge and John Vincent, LEON is now 19+ shops in London with hopes to go world-wide. Their philosophy is “good fast food.” Food that you can enjoy easily, by yourself, with friends and most importantly with family.

There are now four LEON cookbooks. The latest is LEON: Family and Friends. It is 300 pages of things that sort of sound familiar but aren’t. It’s that first cousin difference. For example:

No, you’ve never tasted that chili before. You never even conceived of that before. But LEON has. And, yes, this book is “British” but it takes you on the same world tour you’d have if you were walking the streets of London

The difference extends to more than just the recipe titles or ingredients or methods. It’s right there in the book itself. The paper is different with a succulent smoothness. There are plenty of great photos, but the colors have a soft muteness you don’t see in American books with their typical knockout neon. No, this is LEON style. There is gentleness to the presentation here that at first I found almost disconcerting. And then I got sucked in. I stopped scanning. I began to read. And I began to understand that I want to try many, many of these recipes.

There’s a pretty basic format to these one-page recipes. First, the ingredient list is not short. For main dishes, you’ll need a dozen or more things. But the preparation is only a half dozen steps with most prep times at 20 minutes or less.

These dishes may be casual but they are not simple to the palate. To achieve sophistication, you do need lots of flavors in well tested proportions. And that’s what LEON: Friends and Family delivers.

Not everything in the book is complex. The authors want you to use this book with your children or grandchildren to learn to cook. In that vein, here’s a recipe to enchant any young one:

Heat the milk in a saucepan until is just warm — you don’t want it too hot. Then use an immersion blender to froth the milk. This step guarantees that you will get stripes.