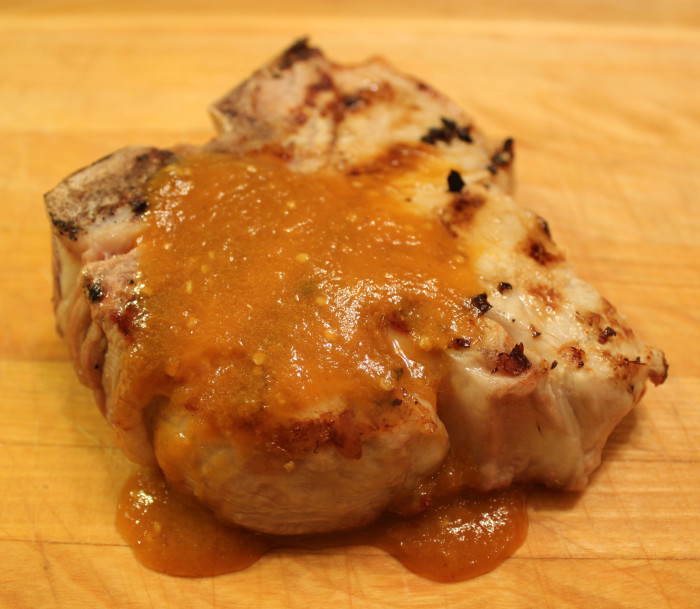 Steak always seems to need a partner. Look in your grocery store and you’ll find a plethora of steak sauces, mostly brown and red and invigoratingly spicy. Some of these potential partners will be familiar like Worcestershire and the shelves always offer something new, perhaps a chipotle-based wonder imported from the Caribbean.

This sauce has chipotle, too, but it is not hot. With a combination of tomatillos and tomatoes, you achieve a truly sublime combination of heat, tang, and sweetness. It’s a great sauce, not just for steak but also for chicken or even salmon.

This idea comes from the Steak Lover’s Cookbook by William Rice. It’s a tad unusual because after you used your blender — or better a Vitamix — to mix it all, William still wants you to cook this down and reduce the sauce by a third. While he says it thickens the sauce, I really did not find much thickening taking place. I do love the flavor, but I suspect next time I’ll forgo the cooking.

William calls this a Red Devil Tomatillo Sauce, a reflection that recipes written almost 20 years ago were deemed to be hot, hot if they had any chipotle in them. We are now so used to chipotle in everything, except our ice cream, that our capacity for heat has figuratively expanded. The amount of chipotle used here is modest, so heat is not a factor. It’s also true that I effectively diluted the chipotle by using 12 ounces each of tomatillos and tomatoes instead of the suggested 8. My version has a mellow heat that went very nicely with that barbecued veal chop.

You can bang this recipe out in half an hour and you’ll find it fresh and complicated. Much, much better than those bottles off the store shelf.

Bring a saucepan of water to a boil. Peel and discard the husks from the tomatillos. Put them in the boiling water and cook until the color changes from bright to faded green, about 5 minutes. Transfer the tomatillos with a slotted spoon to a colander and cool under cold running water.

Melt the butter in a small saucepan until it bubbles. Add the tomatillo mixture and cook over medium heat, stirring occasionally, until reduced by a third and somewhat thickened, 12 to 15 minutes. Let cool. (Sauce may be made ahead, covered, and stored in the refrigerator for up to 3 days.) Serve the sauce at room temperature.