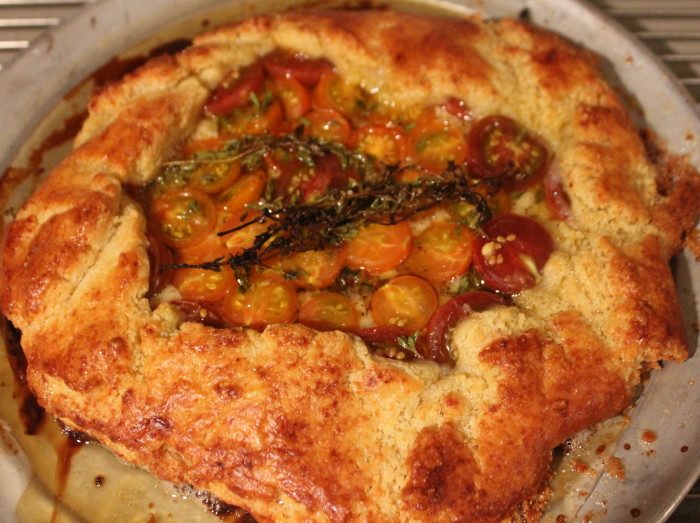 A couple of weeks ago the Wednesday food section of The New York Times featured a photograph so big you’d have to be 20/500 not to have seen it. A tart, no a crostata with tomatoes and a shimmering honey-thyme glaze.

Who would conceive of such a thing? Why Melissa Clark, of course. Suzen and I look for articles and recipes by Melissa for multiple reasons. They read good. They taste good. They never fail. And they instantly become one of those recipes you tell yourself to make once a month upon pain of deprivation. A diet of only Melissa Clark recipes would be life sentence you’d relish for decades.

Melissa was writing about the waning weeks of summer and what to do with ingredients that might just not be in summer prime. Like tomatoes. She devised this wonderful treat which Suzen made at the first opportunity. Our only improvisation, and Melissa gave us permission, was to use sliced cherry tomatoes instead of full size ones.

The crostata is just heaven. The glaze over the tomatoes gives them added sweetness with definite herby overtones. The crust, made with cheese and cornmeal, is soft and satisfying. If, and I mean if, you should have leftovers, then the cornmeal flavor will be dominant that second day. But hot out of the oven the cornmeal notes are quietly buried away. You can taste something is there, but it is hard to identify with the barrage of all the flavors exploding in your mouth.

“I’m doing this again,” Suzen said after two forkfuls. “But next time …” And then she began to rattle off all the things you could play with: adding goat cheese, using some onions, making it all onion, filling it with mélange of already cooked veggies instead of tomatoes, … The possibilities are endless.

But no matter what form it takes, Suzen and I will always pause with that first bite and offer thanks to Melissa for adding to our short list of “must make” favorites.

Begin by making the crust. In a food processor, briefly pulse together flour, cornmeal and slat. Add butter and cheese and pulse until mixture forms chickpea-size [3 to 4 one-second pulses]. Add ice water 1 tablespoon at a time, up to 6 tablespoons, pulsing occasionally until mixture is just moist enough to hold together. Form dough into a ball, wrap with plastic and flatten into a disk. Refrigerate at least 2 hours.

Meanwhile, line a rimmed baking sheet with a double layer of paper towels. Spread out the tomato slices in a single layer. Sprinkle with 1 teaspoon salt and let sit for at least 1 hour and up to 3 hours.

In a skillet over medium heat, combine vinegar, honey and thyme sprigs and bring to a simmer; let simmer 2 minutes, then transfer a bowl. Wipe out skillet, then add olive oil and garlic. Cook garlic for 2 to 3 minutes, or until it is golden and caramelized. Remove garlic and finely chop. Reserve garlic oil.

Line a rimmed baking sheet with parchment paper. Lightly flour a work surface and rolling pin. Gently roll out dough to ¼-inch thickness, dusting with flour if dough is sticking. Transfer dough to baking sheet and return to the fridge for another 20 minutes.

In a small bowl, whisk egg and 1 teaspoon water. Using a pastry brush, brush egg wash over crust and sprinkle top of crostata with flaky salt. Bake for about 35 minutes, until pastry is deeply golden brown. Serve warm or at room temperature.

[Why are my ISO values so high so often; the camera is so good I do not get any noticeable graininess and I can avoid the shadowing from the built in flash that I prefer not to have.]