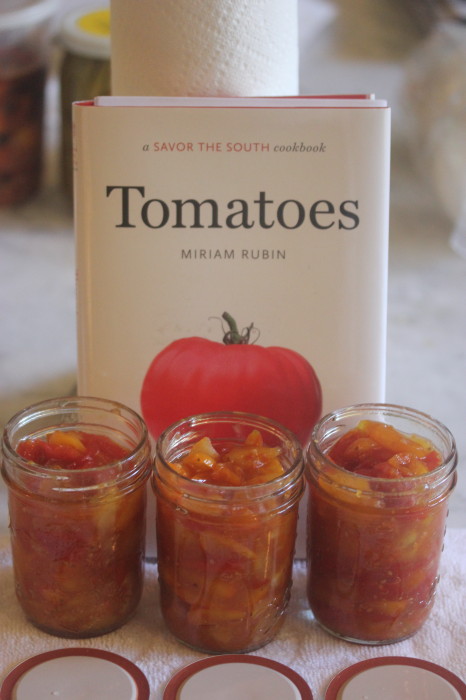 I was in an upscale cheese store in Midtown. A great store we know well. A jar labeled “Tomato Jam” caught my eye. I knew that I could convince Suzen to take it home since it said “tomato” and the “jam” part would just slip past her. Particularly if I mumbled over the right syllable. I was home free.

Before I put it into my shopping basket, I was just curious about how much? I turned the jar over. Adjusted my glasses. Then adjusted my jaw. Carefully, oh so carefully, did I rest that $14 bottle of jam back atop the stack. I spend money, but I have limits.

I sought out my wife. Suzen was inspecting a counter of blue cheeses, figuring what to buy. “Something from Oregon?” she asked me.

“Anything, sweetie,” I answered with a pant that caught her eye. “You’re not going to believe what I just saw.”

We fled in shock and awe. We went from that cheese store to a farmers market a few blocks away, bought tomatoes and determinedly bent our way home. We made our own jam: 4 half-pint jars for maybe $12. This jam is beautiful to behold and tangy on the tongue.

We owe this financial relief to our friend Miriam Rubin and her new book Tomatoes. I suppose “heirloom” is one of those trigger words. Is it really “heirloom” or just an adjective put on to pull me in? We know Miriam researched and tested her recipes with laser precision. It’s heirloom and a gem and something you want to try.

The publisher of the book, the University of North Carolina Press, had not expected me to blog this recipe but has kindly allowed me to do so. This book is from their Savor the South series. You can get more information about the book by visiting: http://uncpress.unc.edu/books/10104.html

If, if you have that pause about making jam and having to sterilize the lids and what happens if you mess up and … Relax. This jam is made, cooled, and stored in the refrigerator. You can run your jam jars through the dishwasher on the high heat cycle. Or, just do what we do: use a big sauce pan filled with water and boil the jars for 5+ minutes while you are tending to the tomatoes. It’s less angst that you think and you’re going to smile at the first bite.

How have we served this jam? As party appetizers with goat cheese on small slices of toasted, homemade bread. With Bourbon on the rocks. Hey, the book says “Savor the South!”

Put the tomatoes and lemon slices in a large, heavy, deep skillet or Dutch oven over medium-high heat. Stir well and bring to a boil, crushing the tomatoes with a potato masher. Simmer for 10 minutes.

Sir in the sugar, reduce the heat to medium, and simmer, uncovered, stirring frequently and skimming off any foam, until thick, about 30 minutes. Stir in the 3 tablespoons lemon juice and cook until thickened and jamlike, 5-8 more minutes. Taste, and if it’s too sweet, add 1-2 tablespoon more lemon juice and return to a full boil

Spoon immediately into clean, hot half-pint jars and fit the jars with 2-pieced lids. Let cool, then refrigerate the jam until ready to serve.