Veal Schnitzel from Neue Cuisine [and Perspectives on Vienna] 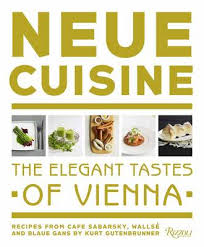 Among world cities, Vienna has long ranked as capital of cuisine. Two years ago Neue Cuisine: The Elegant Tastes of Vienna was published. With fall upon us and winter before us, hearty yet elegant food is what our tables demand. Neue Cuisine remains an inspirational source for you to consider. Author Kurt Gutenbrunner has a small empire of restaurants in New York City: Café Sabarsky, Wallse, and Blaue Gans. Suzen and I live two blocks from Blaue Gans. On nights when she isn’t doing a Cooking by the Book event and we want a treat, it’s a quick stroll to schnitzel-land.

How fitting that this restaurant empire has been created, for Vienna was the capital of the Austro-Hungarian Empire a hundred years ago. Before World War I, the empire comprised most of what we think of as central and eastern Europe. As an Irishman, I am proud of the cuisine of this Celtic city.

Oh,perhaps I should explain. Around 400BC, northern and central Europe was a mass of forests and wandering tribes. Celts, yes the Irish-type-of-Celts, ranged all across Europe and actually founded the settlement that became Vienna. Not long after, some group calling themselves Romans booted the Celts out. A few hundred years later, barbarian tribes disposed of the Romans. But Charlemagne reclaimed the land and established Vienna a hub of the Holy Roman Empire. Vienna never faced a challenge from the rest of Europe again.

Vienna did face challenges from the east. Vienna was targeted by the Ottoman Empire and nearly conquered several times. In 1683, Vienna was literally just days away from falling. Our world would have been very different if Vienna, and most of central Europe, has become Muslim. Schnitzel might have been a victim. God knows what might have happened to the pastries.

Today, most of us think of Vienna as a city far away with little impact on us, except perhaps for those pastries and the schnitzel. Not true. Just in New York, every day thousands of people invoke a Viennese tradition of great importance. Sigmund Freud was a resident of Vienna and developed this idea of talking about problems on a professional basis. A lot of us do that every week, perhaps with a coffee and pastry beforehand. Or after.

I’ve wondered if Freud had any lingering Celtic DNA. Probably not. But he surely loved his schnitzel. From Neue Cuisine, here is a fundamental recipe for schnitzel. The techniques here for creating the schnitzel provide deep insights from Chef Gutenbrunner for creating perfect schnitzel. Mixing the eggs with cream creates a better liquid for attracting bread crumbs, than just eggs alone. And you need plenty of bread crumbs, cups and cups of bread crumbs, so that you can lightly drag the cutlets in the crumbs without having to pat them to get total coverage. No patting, period.

These cutlets might be meat, but they need to be treated with delicacy. You’ll understand why with the first bite.

Season the veal cutlets with slat and pepper. In two separate baking pans, spread the flour and the bread crumbs. In a third baking pan, using a fork, lightly beat the eggs with the cream. Line a large baking sheet with paper towels.

In a large skillet, the deeper the better, heat the oil until quite hot. Put the parsley in a strainer, dip it into the oil, and fry for 10 seconds. Remove the strainer, draining well, and transfer the parsley to a small plate.

Dredge 1 cutlet in the flour patting off the excess. Dip in the egg mixture, letting the excess drip bak into the pan. Coat lightly with the bread crumbs. Do not press the crumbs onto the veal.

Add the butter to the skillet. Add the cutlet to the skillet and fry over high heat, gently moving the skillet in a circular motion to cover the cutlet with fat, until the breading looks bubbly and is starring to brown, about 1 minutes. Turn and cook for another minute, swirling the skillet. Using a slotted spatula, transfer the schnitzel to the baking sheet. Repeat with the remaining cutlets adjusting the heat as necessary so that the coating cooks gradually and evenly, without burning.

Transfer the schnitzels to a warmed platter or plates. Top each with a lemon slice and some fried parsley. Serve with the preserves.