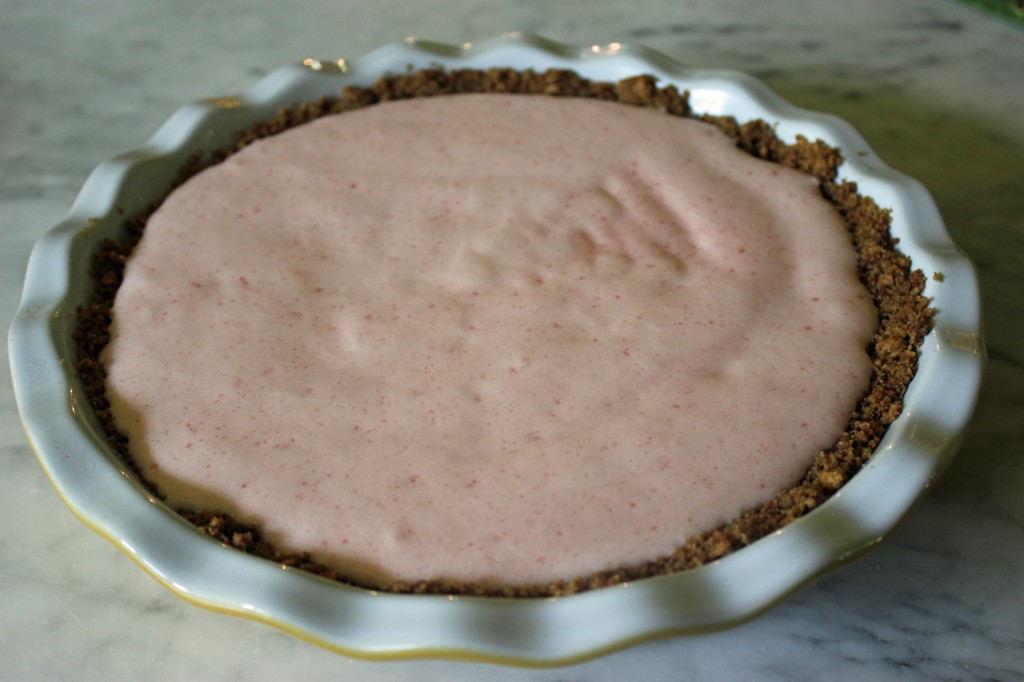 “What a coincidence, so am I” I said.

“I bought the watermelon.”

“You,” Suzen began, “have a large bug somewhere in your anatomy.”

The name, Watermelon Chiffon Pie, had teased at me for over a year. To my credit, I had asked Suzen on multiple occasions. She eats pie, she does just not spring to make it.

Thing is, I had no idea how this might taste. Watermelon juice has a wonderful flavor, yet the juice itself is very “thin” to the tongue. I’ve done a variety of chiffon pies in the past year and everyone had a key component: some liqueur. This pie has none. Not even one of those watermelon schnapps creations you might have. Truthfully, watermelon liquors can be awful: sweetish, yet harsh with a chemical aftertaste.

How does this pie rate? It’s wonderful. Soft and subtle. The watermelon flavor is there, but does not overpower.

What crust to use? Look at yesterday’s post for a graham cracker crust from the same source as this book: Pie by Ken Haedrich.

Two technique matters are important here. First, the way in which the whipped cream and eggs whites are added is important. The method here eliminates of the globs of whipped cream, egg whites, or — worst of all — pieces of watermelon-gelatin.

Second, the method here for getting out the watermelon juice is a bit time consuming. And, I did not follow it. Instead, I put watermelon chunks in our Vitamix and in seconds had watermelon liquid. It’s much faster. The liquid, by the way, is not thin juice but has some fine pulp. I could have used that, for a different texture. Instead, I pour 4 cups of pulp through a sieve and got just under 3 cups net of pure juice.

One these endless summer nights, you want something very refreshing. Nothing is better than this pie.

Combine the watermelon and granulated sugar in a very large bowl. Using a potato masher, mash until the mixture is quite liquid. Set aside for 15 minutes. Drain the mixture through a strainer, reserving almost 2 ¾ cups of the watermelon juice. Discard the pulp and seeds.

Put ¼ cup of the juice in a medium-size bowl and sprinkle the gelatin over it. Set aside for 3 to 4 minutes to dissolve. Meanwhile, heat ½ cup of the juice in a small saucepan over medium heat to a near boil. Whisk the hot juice into the dissolved gelatin. Pour the remaining 2 cups of watermelon juice into a large bowl and stir in the gelatin-watermelon juice mixture. Stir in the lime juice. Place in the refrigerator.

Using an electric mixer, beat the egg white is a medium-size bowl until stiff peaks form. Set aside. Clean and dry the beaters. Using a chilled  medium-size bowl and chilled beaters, beat the heavy cream with the mixer until it holds soft peaks. Add the confectioners’ sugar and beat until smooth and stiff  but not graining. Refrigerate.

When the watermelon juice mixture start to firm up, add about one-quarter of the whipped cream and beat with the electric mixer until smooth. Add the beaten egg white and remaining whipped cream and gently fold them in with a large rubber spatula. If necessary, use a whisk — very briefly — to smooth the mixture and break up any large globs of white or whipped cream. Pour the filling into the cooled pie shell, shaking the pan gently to settle the filling. Cover with loosely tented aluminum foil and refrigerate for at least 4 hours, preferably overnight.

To serve, garnish each slice with a dusting of confectioners’ sugar, then add a dollop of whipped cream, if desired.