Yogurt with Honey and Citrus 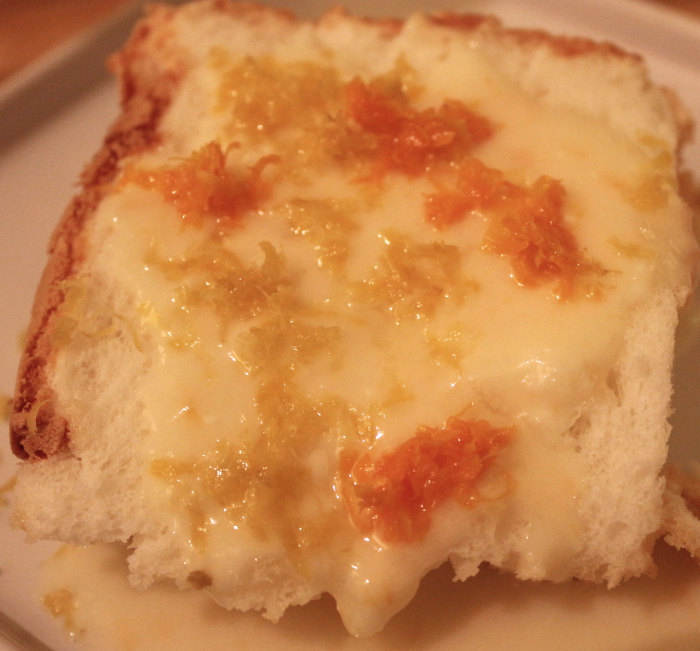 Last week I posted about a marvelous cookbook Sweets and Desserts from Middle East by Arto der Haroutunian:

There have been times when Suzen was coaxing me to taste some, times when I really felt I was in the middle of tonsillectomy.

“You’ll like it. Just swallow,” she’ll be saying, one hand holding a spoon deep in my mouth and the other hand cradling my heat to block the gaging reflex.

Browsing all the pages of Sweets and Desserts, I just was struck by how much yogurt is employed in Middle Eastern recipes. And, I know, humans have been eating the stuff for thousands of years. In my local supermarket, there is an entire wall-length refrigerator case devoted to a dozen competing brands and what seems to be a hundred competing flavors. I keep looking for someone to introduce spinach and foie gras as the “new” flavor of the month.

“Mommy, that one,” a two year old was pointing on Saturday at something on the top row of that long case. If a two year old can brave yogurt, maybe I can.

And I did. Admittedly, I found a simple recipe. And admittedly, I was trying to find a way to enjoy some Angel Food Cake but avoid frosting. So I zeroed in on Yogurt with Honey [and Citrus]. And I have to say I may just become a yogurt convert. Honey is whisked with citrus juices and zest, then yogurt is added. The mixture is chilled until quite cold and then ready to use.

In the picture above, you’ll see that I used extra orange and lemon juice to get a more liquid mixture to pour over the cake. And I added some extra clusters of zest for visual effect.

How does it taste? Well, the base is plain yogurt. There is sweetness but I could not readily identify the source as honey. And the citrus notes do penetrate. This was, I have to admit, as good as vanilla frosting. Even as good as chocolate.

I suppose I should apologize to my wife. I’m considering.

Yogurt with Honey [and Citrus]

Pour the honey into a mixing bowl, add the lemon and orange rind and beat until smooth. Add the juices and whisk until frothy. Add the yoghurt and stir until well blended. Chill before serving.