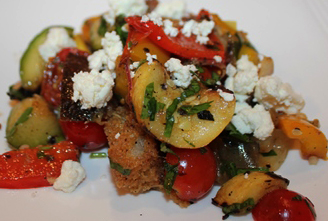 Oh, it’s winter and grilling is something you probably cannot conceive of. For this salad, you need grilled veggies but you can do this indoors. Your stove may have a grilling section, or you can buy a simple grilling surface to fit over your regular burners.

Why now, in the middle of winter? This salad is bright, filled with flavor and those grilling smells inside your kitchen will spread cheer on the coldest of days. This “salad” is perfect for a main course. On a football Sunday, you can offer up a bowl of bread salad and let folks serve themselves, grab a beer, and return to that television showing grown men pound each other into oblivion. Let those gridiron gladiators fight away. You can indulge away on these dashing flavors while your football heroes dash about on snowy or rainy fields.

In a large bowl, whisk together the oil, vinegar, lemon juice, savory, parsley, and garlic. Season with salt and pepper.

Add the grilled vegetables and tomatoes to the bowl with the dressing. Adjust seasonings. Set aside.

Trim the crust off the bread and cut into 1-inch slices. Brush each slice with olive oil. Heat grill to medium-high heat. Grill the bread, turning once, until browned and crisp on both sides.

Add the onion and savory leaves to the marinated vegetables. Place a piece of toast in the middle of each plate. Divide the vegetable mixture evenly among the plates. Shave the ricotta salata over the salad.

Alternatively, the bread can be chopped and mixed in with the vegetables.