To Weigh Or Not To Weigh, That Is The Questions 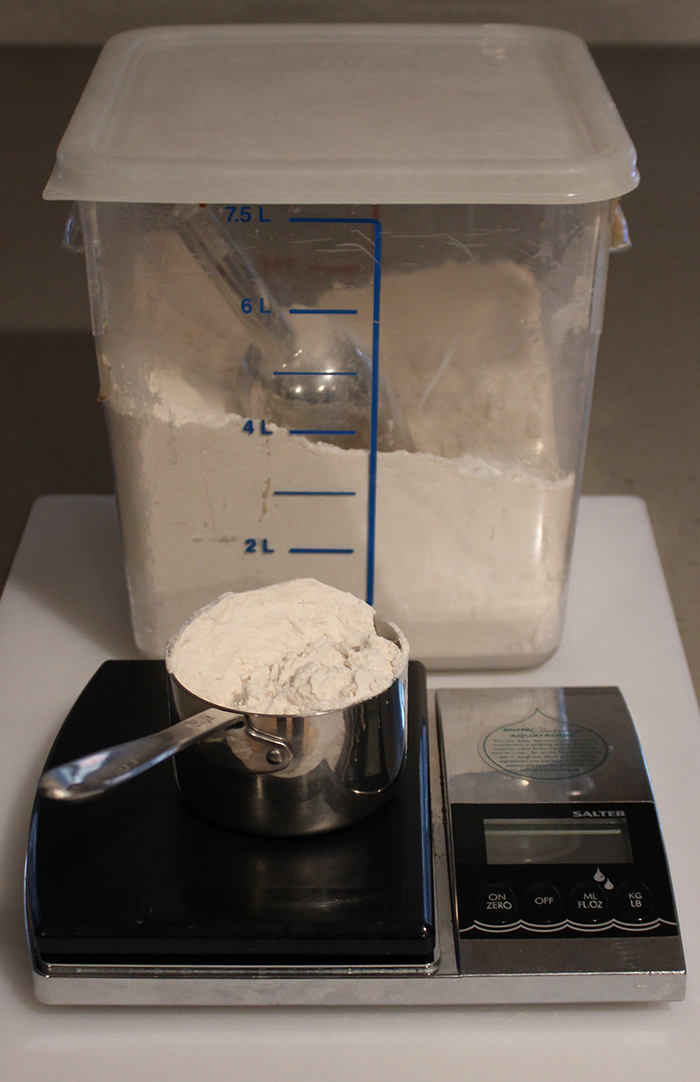 “Can you weigh that, please?” Suzen asked me.

We were making a cake. I had the cup already filled with brown sugar. There were two ways to think about her request: pain in the ass or a wise measure.

Since it was my wife asking me, it was a wise measure. And it was. I had too much sugar in the cup of “tightly packed” brown sugar because I pack really tight. I have incredibly strong thumbs from years of messaging her feet. That may be too intimate for you, but it is a fact of life.

More and more cookbooks provide quantities of ingredients both by volume and by weight. I know, it is a effortto drag out your scale and measure each of the dry ingredients. But, you did buy that scale, right? You did intend to do this, right?

You need to weigh. Especially flour.

Why? From the same manufacturer, the same brand of flour from two bags can differ in weight by volume depending on it was sifted, how the bag has settled on the shelf, the humidity, ..

There is, in fact, no standard for how much a cup of flour should weight. The USDA says a cup of flour is 125 grams [or 137 or other numbers because different people quote the USDA differently] Just to clear that point up, I went to the USDA site but could not find the number And, prominent bakers have their own numbers. Peter Reinhart says 127 grams, but Rose Levy Beranbaum says 157.

If you work in ounces, not grams, then on the web you’ll see quotes ranging from 3.5 to 5 ounces per cup of flour. It’s a mess.

So, I did an experiment this morning. I measured out a cup of flour, 4 different ways. Yes, how you put the flour in the cup makes a difference. Here’s what I found:

I used a big scoop to overfill the cup, then held it to eye level and physically shook the cup until it was level [level “over” the top and not “under”]. The result: 145 grams.

I filled with the scoop and then leveled the top of the cup with the rounded edge, not a straight knife edge, of the scoop. The result: 135 grams.

I ran the cup measure — a metal cup for measuring dry ingredients, of course — down into the flour and then lifted it out and leveled it off with a knife. The result: 137 grams.

I ran the cup through the flour and pressed it hard into the side of the flour container compacting the flour, then scraped it level with the knife. The result:160 grams.

So, the range here, from low to high, is 25 grams or just about one ounce of flour. If this was a recipe calling for, say, 6 ounces of flour, it would add up to a considerable difference, one that must affect the outcome of the recipe.

What to do? First, look for recipes that do have ingredient quantities measured in grams. Use those gram values. Second, if the recipe calls for a volume measurement, pick your number for how many grams in a cup and weigh it out. Suzen and I settle on 140 grams of flour per cup.

What about sugar? Granulated sugar will not compact as much as flour. Running the same experiment on granulated sugar, I found a range of only 15 grams, or ½ ounce, between the different measurement techniques. What to do? Again, use the gram measurement if it is available in the recipe or use the figure of 210 grams per cup.

What about brown sugar? This is a debacle. We’ve given up on buying brown sugar far ahead of time. If what we have is dried out, we toss it. None of the techniques to “restore” dried out brown sugar work for us. For example, if you microwave and then attempt to crumble, you get a gooey texture that could be used for tires. So, we buy fresh. We use fresh. When cooking, use the gram weight if possible. If the recipe says “tightly packed” do not act like a superhero. Be reasonable.

Again the age of the sugar, how it was made, and the moisture content will affect your weight. You best solution is fresh out of the box. At the store, lift the box and squeeze. If you encounter hard resistance, move to the next box.