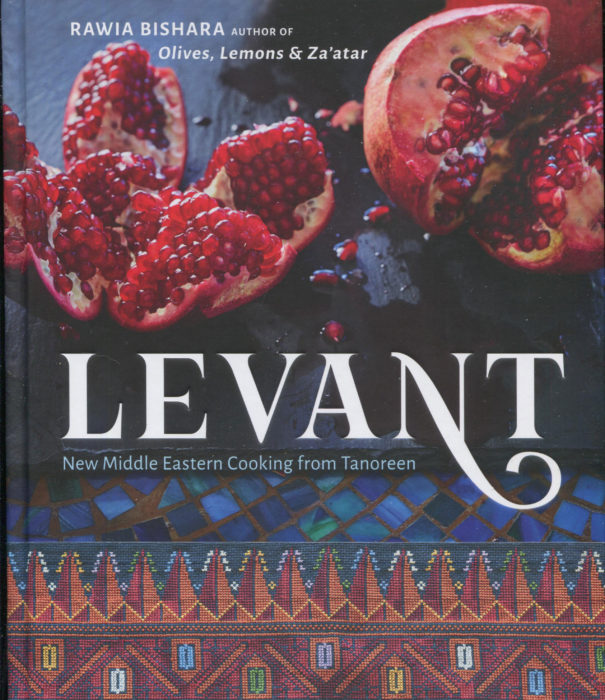 Technically, this is a cookbook, a most superior one. But you could also consider this to be a bit of a comedy book or a religious one.

Well, it is going to put the biggest smile on your face. It will cause you to chuckle or laugh: why didn’t I think of that? And then there are the inspired revelations in Levant. Eggplant for dessert. Yes, eggplant. Baby eggplants stuffed with walnuts and cooked in a honey syrup along with spices and orange juice.

If you can’t do the eggplant, you can do dates instead notes author Rawia Bishara. Rawia is the owner of Tanoreen, a Palestinian restaurant on First Avenue in the far south end of Brooklyn. It’s a mecca for lovers of Middle Easter foods and in Levant those recipes and her genius are on full display. Just as they were in her award-winning first book Olives, Lemons, & Za’atar. You want both books in your kitchen. You can read my review of Olives from 2014 here.

Palestine is a relatively harsh place to live. The climate is intense. Lots of sun, little rain, and then periods of real cold with snow. It does not have the sparing climate of the tropics. The foods successfully grown there are the result of thousands of years of trial and experiment. You won’t find the abundance, diversity or richness of ingredients that you would in, say, France or Italy.

But, but, you will find abundance, diversity, and richness of the prepared food to rival any culture, anywhere.

You don’t need a million ingredients to make great food. You need imagination, creativity, and loving care. And, you just might borrow a bit, too. We’ve all heard of Fried Green Tomatoes. Well, there is a Middle Eastern version, Green Tomato Shakshuka, that will delight you. Here’s a convincing picture: 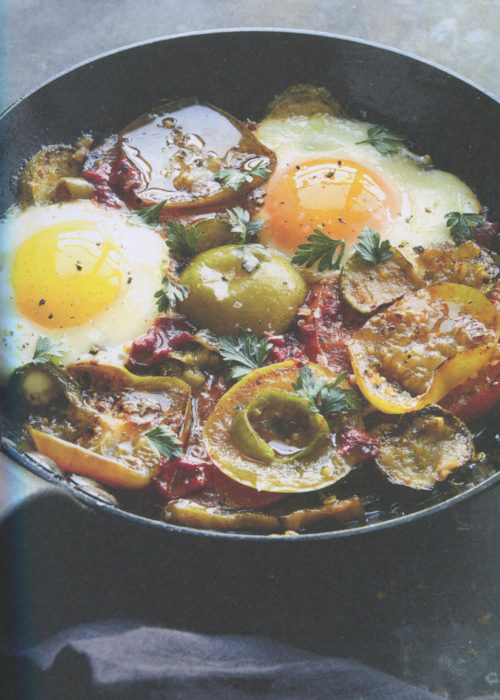 Yes, fried eggs. And while you can use green tomatoes, Rawia uses tomatillos. And some habanero peppers. She loves habaneros. On her stretch of First Avenue in Brooklyn, there is a world spectrum of restaurants and food stores. Rawia is savvy and most inventive.

And she is clever in making multiple use of the ingredients in her kitchen. She offers her Cilantro Salata, or Cilantro Salad, made with 4 cups of cilantro leaves and 2 poblano chiles thinly sliced. Some kalamata olives, because this is Middle Eastern food, and an avocado because this is the American slant that Rawia applies to this dish, to all her dishes. This one via Mexico.

When you read the recipe for her Lamb-Stuffed Potatoes in Tamarind Sauce, what else can you do but salivate and consider going to the store? Her appetizers are enough to give you a full tapas meal, including Oil-Cured Chiles with Walnut Stuffing. There are her Sweet and Sour Beef Rolls that trumpet “Comfort Food” to you.

Palestinian food is often “simple” the way Italian food is simple compared to French. No hours spent making some cream-based sauce. No, just the inherent skill to use basic ingredients — and a boatload of spices and herbs — to produce food that is lavish to look at, to smell, and to savor one bite at a time.

If you buy Levant, it will become one of your go-to kitchen companions. For life.

Go ahead. Zip up your life. Make that Honey-Cured Eggplant and treat yourself to the best of the Levant.