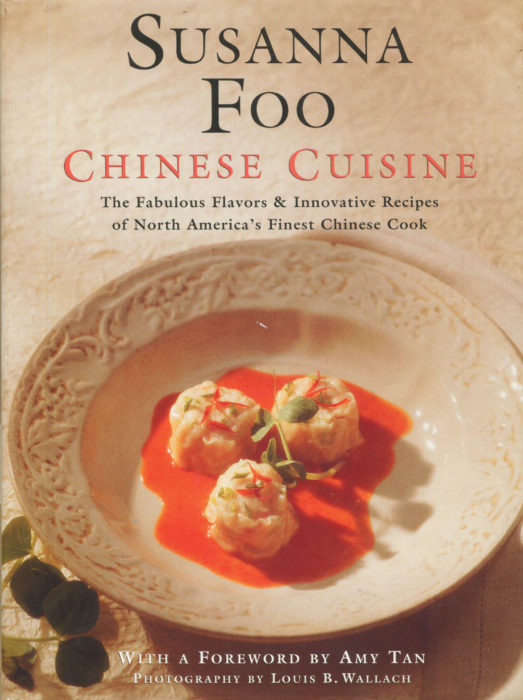 Susanna Foo is a legend, plain and simple. Born in Taiwan, she grew up watching a very talented — but no written recipes — grandmother prepare all kinds of Chinese dishes. Eventually, Susanna came to the US, to Philadelphia, and opened a restaurant, Hu-Nan, on Walnut Street that ran for 22 years and gained worldwide fame. That establishment closed in 2009 and Susanna retired. Her son Gabe, a doctor, had grown up working in Hu-Nan, starting with coat check, washing dishes, and becoming the greeter at the host stand.

Now, Gabe has given up medicine, convinced Susanna to come out of retirement, and the pair have a new place SUGA featuring Susanna’s classics with new ideas. Susanna’s classics were a blend of Chinese cuisine with French influence couple with American ingredients.

You can see the brilliance of her food in Chinese Cuisine, published in 1995. If you pick it up, you are going to start cooking. Let’s take a chapter by chapter tour.

In Dim Sum and Other Small Delights, Susanna immediately displays her fondness for richness and elegance. There are the Veal Dumplings with Ancho Chile Sauce, American Anchos being the closest she could come to here mimicking Sichuan heat. There is a delightful Chinese Eggplant Salsa. And, again using American peppers, you will find Jalapeno Peppers with Pork Stuffing. The book cover, by the way, is Crab Sui Mei with Red Bell Pepper Sauce.

The Soups chapter of course has Hot and Sour. There is an interesting Salmon Congee, congee being rice soup, a kind of watery risotto. If you want complexity of flavor and if you want to spend some time in the kitchen, then you can work away on her Seafood Wonton Soup, pictured here: 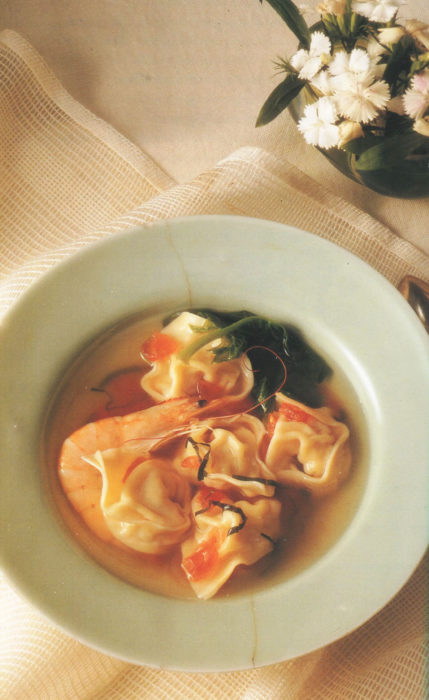 Heat is on display in Vegetables and Salads. You will find Spicy Cucumbers with Sichuan Peppercorn Vinaigrette and Spicy Persimmon Chutney. The perpetual infatuation with eggplant continues with Soy-Braised Chinese Eggplant with Zucchini and Mushrooms.

In Fish and Seafood, some of the French influence appears in dishes like Sea Bass with Caramelized Sweet-and-Sour Ginger Sauce or Prawns with Poached Pears and Curry Sauce. Suzi and I have a new steam oven and I think we are destined to try out the Steamed Crabmeat Soufflé.

In Fowl Susanna presents classic Chinese dishes, sometimes with an American substitution. For example, Cornish hens replaces smallish Chinese chicken in the Tea-Smoked Cornish Hens. I always thought that Kung Pao Chicken was one of the American-Chinese devices dreamt up this side of the Pacific. But, no, it really is a Chinese dish and the sauce recipe here will have you salivating. For complexity, why not try the Chicken with Mango, Asparagus and Ginger

Meat dishes about in Veal, Pork, Lamb and Beef. In typical Chinese style for multiple ingredients, you will find the Twice-Cooked Veal Breast with Mushrooms and Green Pepper. And you might be intrigued by the Honey Grilled Lamb Chops with Jalapeno Pepper Puree. The puree is pure jalapenos, with the seeds, plus garlic, roasted and then blended in paradise.

In Noodles and in Rice you will encounter her upscaled version of basic foods:

In Breads, Pancakes and Crepes, the comfort food is thick and hearty:

Who has time, who has room, in a Chinese restaurant for dessert. In Desserts, Susanna gives you reason to pause, loosen your belt, and binge on:

Chinese Cuisine is a  lovely volume. It was monumental the year it was published. Almost a quarter century later, it still is.