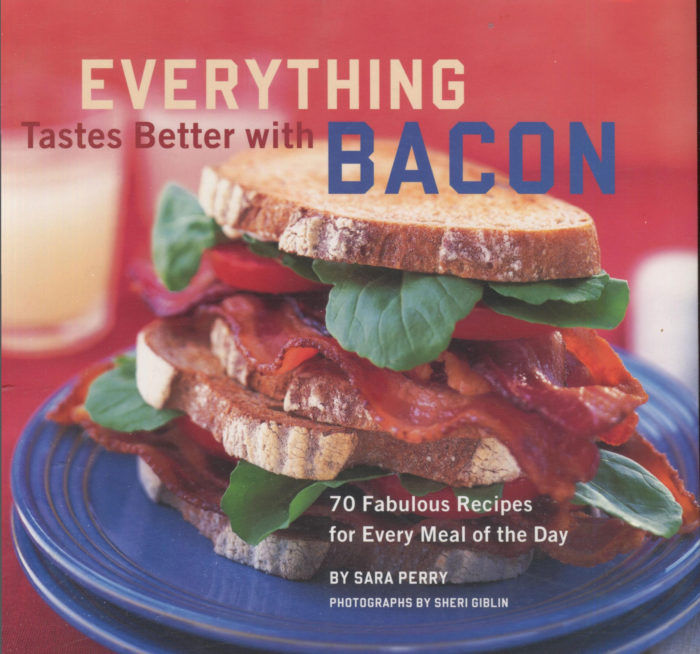 Suzi and I love cookbooks. Our only problem is keeping track of where they are: in our NYC apartment, in the house upstate? Oh, it’s worse than that. In NYC, in the front room, in Suzi’s office, in Brian’s office, in the basement, in the storeroom that was my daughter’s bedroom when she was going to NYU? We’ve told Kelly she can’t move back. Too many books.

I was scanning the basement collection, the one upstate and not the one in the city. And this old friend popped out: Everything Tastes Better with Bacon. It’s a grand book from 2002. I went to see what else Sara Perry might have written recently and learned, sadly, that she passed away two years ago. I grew up in Portland but left in 1967 when it was still a lumberjack town. Sara never left and wrote a dozen books and hundreds of newspaper pieces about Portland and Oregon food.

Oregon food. She toured the world in true culinary spirit in her books and articles, but her passion was Oregon. Not the Pacific Northwest. Not Washington, not Seattle. She was Oregon first and foremost.

In this tome, there are seventy perfected recipes using bacon. No, bacon is not always the main ingredient. It is just, as she says, everything tastes better with bacon. Breakfast ideas, of course, because she thought breakfast without bacon just really wasn’t breakfast. Who can disagree? But the ideas flow for the entire day: salads, pasta, side dishes, appetizers, bacon classics, and even, yes dessert.

Here’s a smattering of the ideas:

Linguine with Bacon and Vodka Sauce

Not-Quite-Kosher Chopped Chicken Livers [yeah, not kosher at all]

I know, bacon in a dessert sounds weird but you really are safe trusting Sara. The bacon is cooked with brown sugar so that it becomes candy stiff emitting that distinctive umami note. Contrasting with the fruit, you’ll believe bacon has far more space in your kitchen than just the breakfast table.

Sara was a distinguished writer who presented her ideas with spirited passion. Seventy recipes? Gee, I bet you’d like at least thirty-five. Try it. Ah, the book starts with a detailed discussion of bacon types, buying tips, and storage. Those are a few pages that you should definitely pig out on.