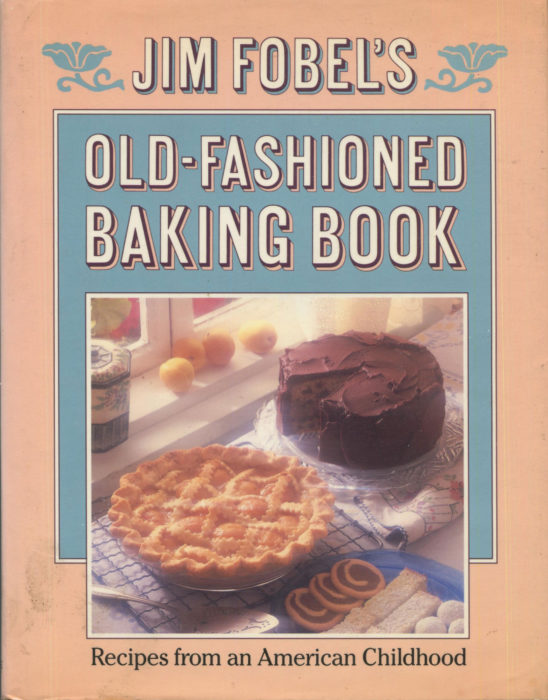 Jim Fobel, 1946-2014, was a food writer with a knack for history and preserving his Finnish heritage. Born and raised in Ohio, Jim grew up in his mother’s and grandmother’s kitchen. He memorized their baking, reflecting recipes from the earth 20th Century and even from the late decades of the 19th.

Published in 1987, this book won a James Beard award and deservedly so. It was not an easy book to write. Those “family” recipes had not always been written down perfectly. His mom and grandmom had not necessarily followed the recipes. And, Jim discovered, the taste palate of old-fashioned time was different. Far more sugary, for example.

So, the recipes in this book were all tune and tried, adjusted for the “modern” tastes of the 1980s. It’s a standard arrangement with chapters for

The book has value as an historical snapshot of early 20th Century baking. What did they create and how did they do it. The recipes are “typical” and, aside from the Finnish specialties, ones you already know by name. But the ingredients and techniques are different. Those cakes for example, are often made with equal proportions of butter and margarine, a holdover I suspect from Depression days when pennies were pinched at every meal.

There is value here in seeing early versions of classic recipes. You get the unadorned original version of key recipes, like the Chocolate Butter Frosting. Here the ingredients are just chocolate, butter, confectioner’s sugar, whole eggs and vanilla. The butter is creamed, the eggs and sugar added, and the melted chocolate beaten in. Simple. Rich and delicious.

Ah, Jim remembers that often his family would double the recipe when frosting a cake. He came from a great family.

There is one particularly lovely recipe, Grandma’s Blackberry Cake, in the book. It’s a bundt cake with cloves, cinnamon, sour cream, and pecans. I’m going to take a shot at making it and I’ll let you know the results. It seems the ideal late summer delicacy for a Sunday morning.

If you have fond memories of “original” desserts and are not sure how you might make them, then the Old-Fashioned Baking Book is just what you need. There are recipes here for classic Banana Bread, Coconut Cream Pie, German Chocolate Cake, and that dense Pecan-Coconut Frosting that goes with the German Chocolate Cake. Simple, poignant recipes for a busy world.