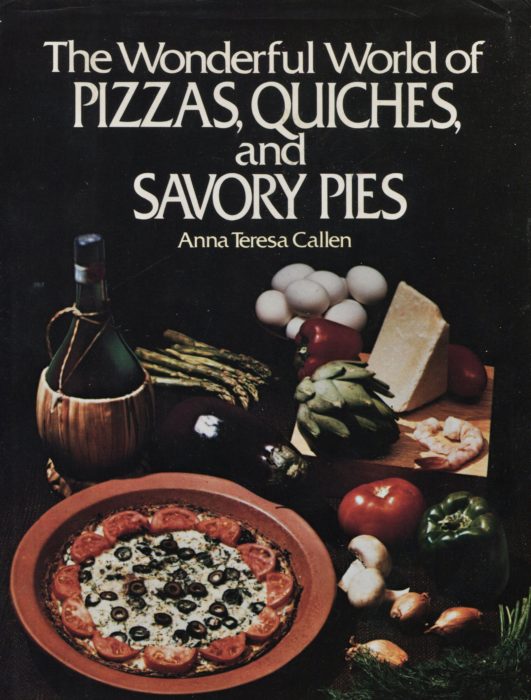 Sometimes a cookbook can sit on your shelf for decades, used perhaps only once a year, but never, never relegated to the basement or attic. How could you do that to Anna Teresa?

Anna Teresa was larger than life, by many orders of magnitude. And loud. She was raised in Italy during World War II and lived a very meager life. She and her family had to manage every morsel. So, decades later, when you were taking a cooking class in her Village apartment with its incredible views to the south, well, if you had a fragment of bay leaf and began to toss it aside, there would be a ruckus. Or a storm.

She never wasted anything. There were no scraps in her kitchen. Everything was used and everything was delicious. Reading this book from 1981 you can begin to understand why.

Walking the Village streets one summer, Anna Teresa noticed how many variations of pizza there were around the world. Tacos for example. Yes, Anna was quite Italian and knew perfectly well how all world food developed from Italian origins.

So, she wrote this book with recipes from around the world:

France and Her Neighbors

Around the North Sea and The Channel

Around the Mediterranean and Middle East

The Italian and French chapters are the largest and, for reasons I’ll discuss, the most important. Here you will find Anna’s favorite crostata: Artichoke and Cheese Pie with three cheeses and heavy cream. It’s typical of 1981 that she calls this a pie and does not use that now happily more common crostata.

Here’s another pie you just might swoon over: Swordfish Pie ala Fiammetta. A springform pan is lined with pasta and filled with swordfish, celery, onion, tomatoes, capers, raisins, olives and cheese. One pot meal served springform style.

There is, of course, a French counterpart to that last recipe: Brioche Oppio Style. Brioche sides and top encase a filling of fish, mushrooms, cream, mussels, shrimp and tomatoes sealed in a meat loaf pan. Not your usual meatloaf.

If you are a history buff, you know World War II was famous for the Battle of the Bulge near Bastogne. Here’s another bulge: Bastogne Pot Pie with a filling of sausage, raisins, prunes, bananas, apples, ham and calvados. This is the first time I have ever seen bananas as the ingredient for a savory pot pie. Now, I just have to convince my wife to make this. If I tell her “raisins and prunes” and mumble the “b” word, well, I have a fighting chance.

This book is a treasure as it captures traditional Italian and French cooking from forty years ago and the immediate decades before. It’s a snapshot that is intense and colorful. Some traditions stop being active and live only on the pages of books like this one.

Why do we have preferences for Italian and French food? Put those cuisines above others from around the world? And, we do that picking, don’t we? When was the last time you sought out a Bulgarian restaurant? The other chapters in this book give you some idea of the answer. Most countries today do have exciting food as travel and the internet and greater food availability let national cuisines sparkle and compete for sophistication. But forty years ago, food from Great Britain or Central or Eastern Europe could be dreary. Compare the recipes in those chapters with the French and Italian ideas, and you’ll be convinced. Anna was not being prejudicial. She picked the best she could, but the best was in Italy and France.

Still there are gems from other lands. The Giant Bread Dumpling from Czechoslovakia — 1 cup of bread crumbs and a pound of flour and 2 cups of milk cooked in one really, truly big dumpling. You cut it up and serve with butter or cheese.

Anna Teresa was a wonderful author, teacher and culinary inspiration. You can still find this book on Amazon, in the newer1996 edition. That one is only twenty-two years old. You’ll be quite amazed when you leaf through the recipes. You might even find yourself buying bananas.