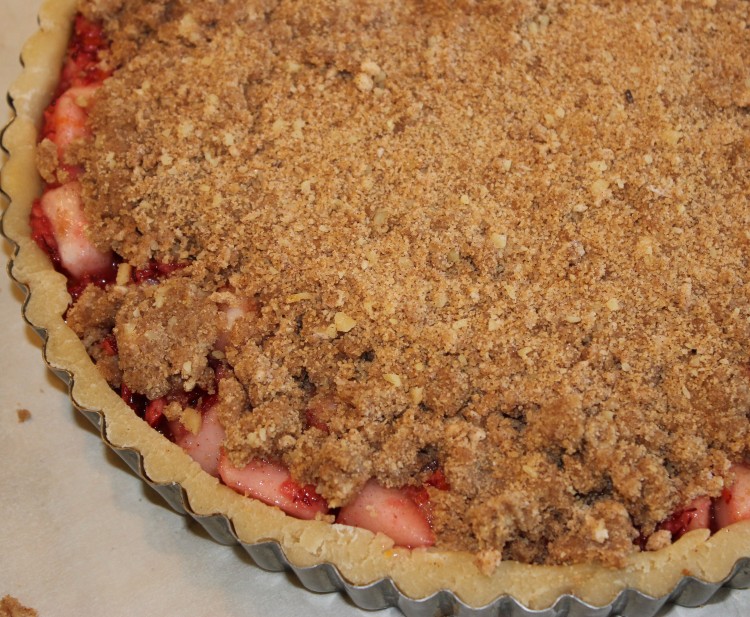 And so it came to pass that on Christmas there was miracle.

“Oh, this is so beautiful I can’t stand it,” Suzen said as she made this pie. It was afternoon and Suzen, who is not addicted to dessert and certainly is not a pie fan, was surprisingly into this pie project. It had captured her imagination and heart. She was playing the crumb topping. Surplus pear and cranberry filling was being sampled on the side.

We brought the pie to a Christmas Eve dinner party. The pie was devoured, mysteriously for no one spoke. They just ate, got up, got seconds, and finished it all off. Smiling as she returned to our car that night, Suzen said, “I’d make that again in a flash.” And she did. We had it for our own Christmas night party the very next night. Once again, the pie was totally gone and everyone was raving.

With Suzen now in favor of pies, I’m so thrilled that I almost have the courage to mention my gun permit again.

Why is this pie such a success? It’s so good, so pretty, so much in the spirit of the holidays, that you just fall in love with it. We’ve all had lots of apple pie, and pumpkin pie, and some berry pies and a chiffon or two. But when did you have a pear pie, perfectly balanced in flavor and texture.

This recipe is from Perfect Pies by Michele Stuart who has two pastry shops in Connecticut. She also has twenty-six National Pie Championship Awards [not all but mostly first place; personally, I think the judges must have erred in those not-first years]. The book has 80 recipes, which is enough to let you make a perfect pie for about a year and half of weekends. That would be a noble project.

Seriously, Perfect Pies is a delightful volume. Our first try was this Pear Cranberry wonder. We will be baking and blogging more.

To prepare the pie shell, on a clean, lightly floured work surface, roll out half a lough with a rolling pin until it forms a 10-inch circle. Wrap the remaining he dough tightly in plastic wrap and reserve it in the refrigerator for future up to 5 days. Fold the circle in half, place it in a 9-inch pie plate so that the edges of the circle drop over the rim, and unfold the dough to completely cover the pie plate. Using your thumb and index finger, crimp the edges of the pie shell.

Brush the edges of the pie shell with heavy cream to create a perfect golden brown finish.

Set the pie shell to the side while you make the filling.

To prepare the filling, place the cranberries and ½ cup sugar in a food processor and pulse 6 to 8 times, or until the cranberries are coarsely chopped. Transfer the cranberry mixture to a large howl, and add the pears, lemon juice and orange zest.  Lei the fruit sit for about 10 minutes so that the juices can seep through.

In a separate small bowl, combine the remaining 1 tablespoon sugar, the cornstarch, cinnamon and nutmeg. Add the sugar mixture to the fruit and combine thoroughly. Place the fruit mixture in the pie shell, distributing it evenly. Sprinkle the crumb topping over the filling, covering it completely.

To bake, place the pie plate on a baking sheet and bake for 15 minutes. Reduce the temperature to 375°F and continue baking for 40 to 45 minutes, or until the pears are tender and the juices are bubbling. Transfer the pie plate to a wiring cooling rack and allow the pie to cool and set for 1 ½ hours before serving. 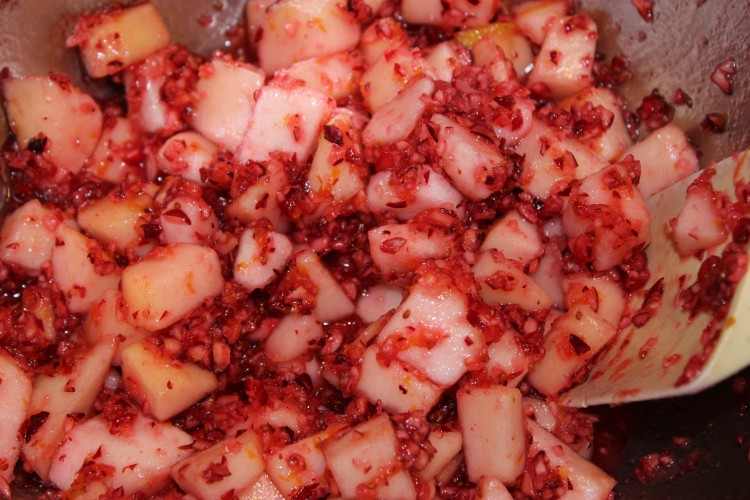 Yield: enough for one 9-inch pie

In a large bowl, combine the flour, brown sugar, cinnamon, and salt. Using a pastry blender, incorporate the butter by “cutting it in” to the flour until the butter forms small, pea-size pieces. Add in the chopped walnuts, using your fingers to gently corporate them into the crumb base.

Pair this topping with a traditional pastry pie shell and the filling of your choice. Once the filling has been placed in the pie shell, distribute the walnut crumb topping evenly over the filling until it is completely covered. Bake as directed.