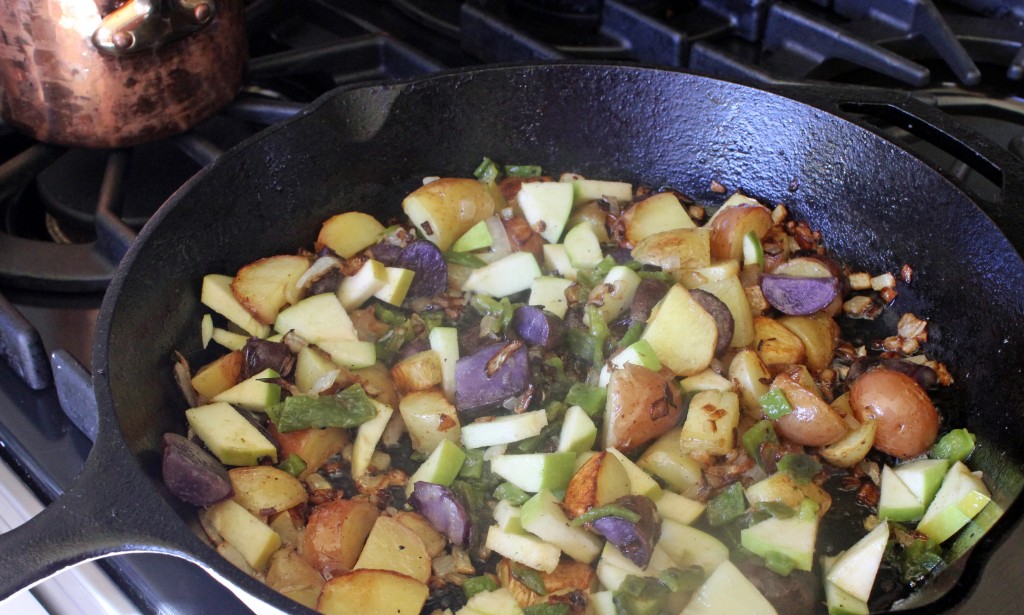 There is no way to deny it: “hash” is a four-letter word. Using the word often denotes something either derogatory or low quality. Did you make a hash of that last speech?

In computer science, a hash table is a good thing, a way of finding data. But a hash function is a cryptography technique which conjures visions of secrets and the Dark Side.

Food wise, it does not get much better. “Hash” does not inspire visions of elegance. Here’s the quick definition of hash, as a food, in Wikipedia: “a coarse mixture of ingredients.” While hash-like dishes have long been served in the poorer regions of Great Britain, in the United States it was Hormel — the canned meat king — that pushed the hash concept beginning in the 1950s. Thanks to the miracle of congressional lobbying, we can all celebrate September 27th as National Corned Beef Hash Day. Yum.

It’s funny but in New York City you can have a hash dish at the counter of a local diner for $6 or dine on a white tablecloth with hash at an upscale hotel restaurant for $26. The difference? Probably a dash of sour cream and some finely diced chives. People eat hash, they just don’t talk about it.

Let’s consider about another item that has an “image” issue: the cast iron skillet. You probably own one or two. You probably don’t use them often. And you probably wash them when soap after using. Oh, dear, so very, very sad.

It’s true that the cast iron skillet helped pioneers and prospectors in past centuries. Your grandmother probably used hers more in one month than you have in your lifetime. When she did, soap was not used. After cooking with the skillet, you should simply rinse it out, wipe with a paper towel to collect any oil or grease, and put it briefly on the flame to dry out. A seasoned skillet should not see soap. Bumps of burnt stuff on the bottom? Fill the pan with water, add baking soda, and boil. No soap.

A seasoned skillet is tool that is as wonderful as any mega-bucks pan you eye in that gourmet store at the mall. Cast Iron Skillet: Big Flavors offers 90 recipes that will make your cast iron advocate. Authors Sharon Kramis and Julie Kramis Hearne have other cookbooks under their belts, including The Cast Iron Skilled Cookbook. Accomplished chefs, writers, and restaurateurs, they know they are masters of that weighty iron tool. Their recipes in this latest book include:

The first thing Suzen and I tried, this smoked salmon hash, is so elegantly good and beautiful you will be boasting that you ate hash. And that you liked it. And that it is really good. If you hand out little sample tastes, that look of incredulity of people’s faces will vanish. Your samples will vanish, and you will be deluged with requests for this marvelous recipe.

Do use all the suggested ingredients. The apple, for example, is just like a fine herb adding a thin layer of sweetness and flavor.

This is the first recipe in Cast Iron Skillet: Big Flavors. One down, 89 to go.

In a medium saucepan, cover the potatoes with cold water. Bring to a boil, then turn down the heat and cook until the potatoes are fork tender, about 10 minutes. Drain and cool slightly, the coarsely chop.

In a 10- or 12-inche cast iron skillet, melt the butter, add the onions, and cook for 3 to 5 minutes. Add the olive oil and the chopped potatoes and cook over medium heat until the potatoes are lightly browned, about 8 minutes.

Add the apple, chilies and cream. Continue to cook for 5 minutes and remove from the heat. Break the salmon into 2-inch pieces and place on top of the potatoes. Sprinkle with parsley, salt, and pepper. If you desire, top with sour cream and green onions or chives. Serve piping hot.