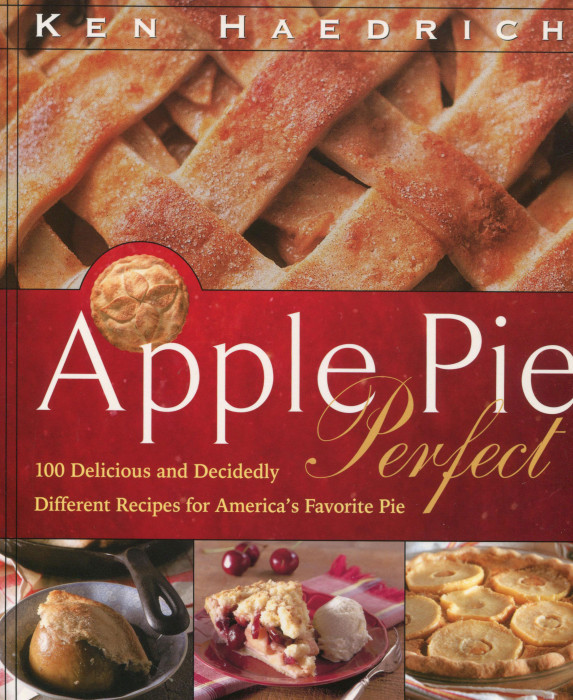 In the fall, we turn to pie. Especially apple pie. We all have that one apple pie recipe that is constant in our lives, perhaps one from childhood that has stayed with us for decades. We know what to expect, the snap of that particular crust, the aroma of cinnamon, the syrupy liquid as you cut open the pie — never able to get a pristine first piece out, but who cares. It’s apple pie.

Now, Suzi and I have our own special apple pie, a jalapeno and apple pie that you can see right here. The recipe comes from Ken Haedrich, America’s Pie Master. Ken has a dozen books in his portfolio including the invaluable Pie and this book, Apple Pie Perfect from 2002. Apple Pie Perfect has 100 recipes for pie and pasty in eleven tidy chapters.

There’s a collection of recipes, Apple Pies of Fall and Winter, that you can indulge in all this season, warm, rich and comfy:

My Mom and Dad’s Brown Sugar Apple Pie [we made it, I’ll post it!]

For next summer you can try the recipes in the chapter Distinctly Summer Apple Pies:

If you like apple flavor, and want to double down, there are ideas for you in Very Apple Apple Pies:

We often think of cake as the way to celebrate a special occasion. But, instead, you can consult Special Occasion Apple Pies:

These days, “pie” can actually mean a lot of things. Like not pie, but “pieish” So in Apple Pie on the Fringes, you can find:

Apple and Pear Hand Pies with Raising and Walnuts

Apple Pie Perfect projects aroma page after page. Have you ever thought of taking a cookbook, a single cookbook, and doing every single recipe? Apple Pie Perfect is that kind of book. You don’t have to hurry, but you don’t want to delay either. You really don’t.